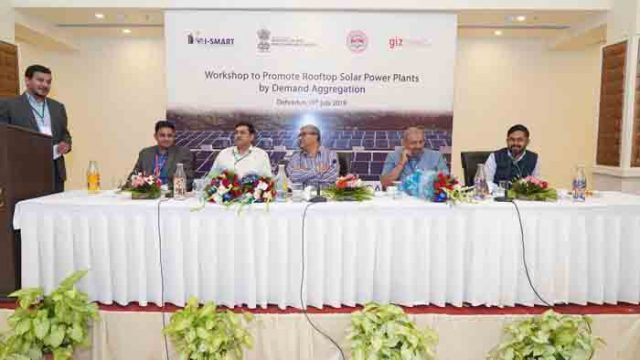 Dehradun, 19 Jul: The Energy and Resources Institute (TERI) and US-based CADMUS group launched the Indian Solar Market Aggregation for Rooftops (I- SMART) program here, today, with a workshop on Rooftop Solar Power Plants. The programme was held in the presence of Additional Secretary, Energy and Power, Alok Shekhar. Also present were Advisor, GIZ, Abhinav Jain, Chief Project Officer, UREDA, Department of Renewable Energy, AK Tyagi, Anand Upadhyay, Fellow, and Arpo Mukherjee from TERI. The programme is supported by the Ministry of New and Renewable Energy (MNRE) and the Deutsche Gesellschaft für Internationale Zusammenarbeit (GIZ) GmbH. I-SMART aims to accelerate the rooftop solar market in India. As per recent reports, India has achieved close to 4 GW out of its 40 GW rooftop solar target by 2022. Various state government officials, chairpersons of RWAs (Residents Welfare Associations), deans of universities, industry association representatives, caretakers of ashrams, rooftop solar installers, bankers and others were also present at the event. Chief Project Officer, UREDA, AK Tyagi, stated, “As of March 2019, total rooftop solar installed capacity in Uttarakhand is about 18 MW. With about 300 days of sunshine per year, the state has excellent potential for rooftop solar deployment. The I- SMART team will leverage its experience in solar market development to increase the rate of rooftop solar installations in the state. It will also work with UREDA to fulfill the plan of adding more than 28 MW of rooftop installations by September 2020.” Project Manager, I-SMART, and, Fellow, TERI, Anand Upadhyay said, “The team will work to increase the pace of rooftop solar adoption among the residential, government, and commercial & industrial (C&I) sectors. Apart from reducing electricity bills, the promotion of rooftop solar sector would create new jobs and subsequently lead to economic, social and environmental progress in the state.” He added, “The project team has already studied and analysed more than 270 buildings across Uttarakhand to identify their potential for rooftop solar systems. In addition to achieving energy independence, this demand aggregation programme will empower the state government to focus on environment conservation and reducing carbon footprint.” Associate Fellow, TERI, Arpo Mukherjee, also added that the project team aimed to achieve this at the grassroots level via digital and social campaigns. Under this programme, a team of volunteers, called Solar Friends, would be trained to carry out door- to-door outreach activities to raise public awareness across the state. As per TERI the demand aggregation efforts under I- SMART project have been launched successfully over the last two months in Dadra and Nagar Haveli, Daman and Diu, Gujarat, and Jammu & Kashmir. I-SMART is also going to be implemented in the state of Himachal Pradesh. TERI also has a successful track record of implementing consumer demand aggregation for rooftop solar among more than 6,000 individual households in Surat, Gujarat and more than 100 RWAs in Dwarka, New Delhi achieving a cumulative implementation of over 70 MW rooftop solar capacity.