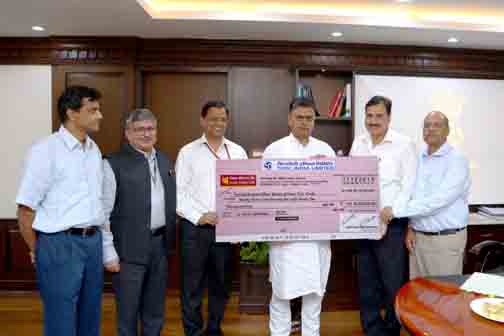 RISHIKESH, 17 Oct: THDC India Limited (THDCIL) has paid dividend of Rs 93,76,92,000 to Government of India on account of its financial performance during FY 2018- 19. DV Singh, CMD, THDCIL, handed over the pay order, today, to MoS(IC), Power, RK Singh at the Ministry of Power, New Delhi. On the occasion, SC Garg, Secretary (Power), GoI, Rajpal, Economic Advisor, Union Ministry of Power, Anirudh Kumar, Joint Secretary (Hydro), MOP, and RN Singh, GM (SP), THDCIL, were also present. THDCIL had earlier paid a dividend of Rs 314.76 Crore to Govt of India. THDCIL is one of the premier power generators in the country with installed capacity of 1513 MW with commissioning of Tehri Dam & HPP (1000MW), Koteshwar HEP (400MW) and 50MW Wind Power Project at Patan Gujarat to its credit. THDCIL is implementing the 1320MW Khurja Super Thermal Power Project in UP. The foundation stone of the project was laid by PM Narendra Modi on 9 March, 2019. THDCIL is bestowed with ‘Mini Ratna’ Category –I & Schedule ‘A’ Status.