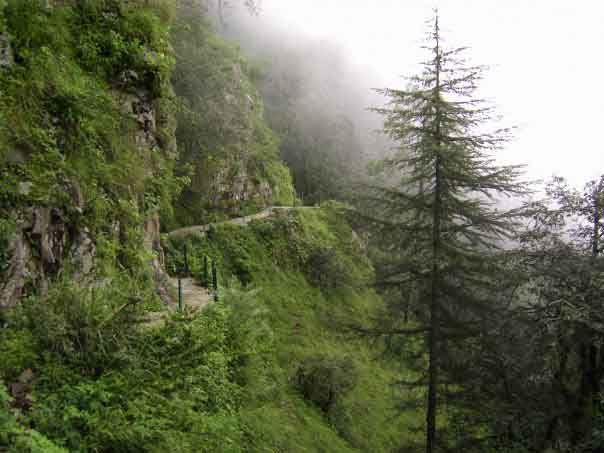 If you walk the pagdandi known as the Eyebrow – one end of which is very near our family estate tucked away at one end of Landour and the other just above Woodstock School, at the tip of an expanse of wonderful cottages dotted along the hillside – you will stop at one specific point, right where the longest gap in the thicket of trees allows you to, and gaze out at the vast valley. It is a breath-taking sight.

This corner comes just as the narrow path – first used by doodh-walas and shepherds countless years ago – turns from dirt to cement and slopes upwards for a few feet before flattening out like only such goat paths can in the Himalayan mountains. There is a rock at this bend, which juts out like a bump on a log. Today, you have to contort your body between two metal wires erected as a railing, but for many years all you had to do was step forward and sit down on that rock to take in the majestic view before you.

It all looks so perfect – the rolling hills, the sky a tinted shade of blue, the wind stopping in its course to take it all in. A spot where a poet might sit and pen his thoughts, or lovers might meet under the stars, or friends are reunited with ghosts of the past. If you are alone, or with another but stay silent for a few moments, you will at times hear the wind whispering in the pines above.

Not far ahead, above another bend in the path where the cement gives way again to dirt, there is a tiny knoll that sits about forty feet up the hillside. This spot is where my grandfather used to sit, and where my father and his elder brother sat after him, and where I sat in the mid-90s. It is a place of solace and solitude, tucked underneath another rock outcropping. You can sit here and think or write or pray or sing, whatever you want. It is a very private place, if you have the will.

I first climbed up to that knoll as a teen-ager, having heard about my grandfather sitting there. I did not know what I was supposed to do when I got there, and so I flopped down and stared out at the vast expanse of hills and fog below on that monsoon afternoon. I remember it well, some twenty-five years later.

In June of 2013, I had the very different experience of climbing – actually running, not once but thrice – up that steep stretch of hillside to that spot. It was for a scene of a tele-film my father directed, called ‘Ek Fursat-e-Gunaah’, which was his ode to the Hindustan of his youth and his father and Landour and the mountains he was born in and to the human spirit and to the music of languages, in particular Urdu and Hindustani.

During this particular scene, my character and another girl run across the Eyebrow and stop at that last sharp bend, then climb up to that spot where my grandfather sat decades ago. My father, standing near the aforementioned rock about 50 metres to our left, shouted out that he wanted the two of us to practice the running bit twice. We did it, stumbling and panting and grabbing onto twigs and roots while doing our best to maintain the youthful exuberance required in the scene. It was not easy.

Then, at last, came the actual take. My father got what he wanted, his approval wafting across the Eyebrow and the valley below as my co-actor and I looked at each other, the wind nearly knocked out of our lungs, and laughed.

Standing there waiting for the very worried looking cinematographer to nervously make his way up the jagged path to join us, I looked out.

On one of our few visits back to Landour in 2019, my wife Meha and I walked the Eyebrow to that last sharp corner and attempted to climb up to that spot. We did not get to the top, for it was monsoon and the terrain was slippery and the weeds and thorns were a deterrent. We sat there instead for a few minutes under the tree just above the bend, and looked out at the valley.

If you’ve walked this path, you know what I mean. If you have not, I encourage you to try this one day and make your own memories.