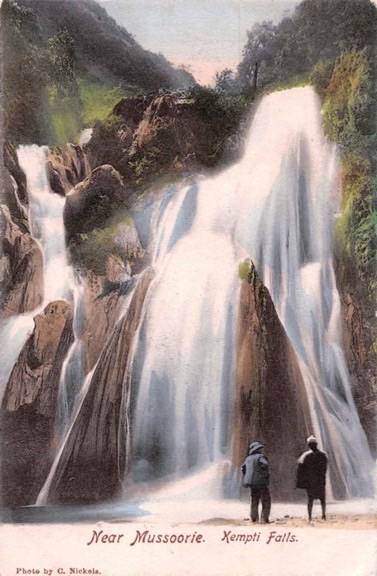 Let me assure you that those of us who pan the sands of history, discover soon enough that there is little space for amateur guess-work. Its this itch to clear up origins which led me to a pretty teenager – all of sixteen-year-old – who won a Miss Mussoorie beauty pageant in 1952. This story saw its wedding bells when Nutan turned into a celebrated Bollywood actress. Thirty years down the road these beauty contests continued in Whispering Windows, Hakman’s Grand Hotel and Savoy Hotel. Library’s Whispering Windows’ low ceilings and darkened interiors were ideal for a rendezvous. As the lights dimmed, you listened to the live soulful music of Thunderbird, Ashwani Kumar or the juke box belting out Nancy Sinatra’s These Boots Are Made for Walking; or Brian Hyland’s Itsy Bitsy Teenie Weenie Yellow Polka Dot Bikini or Chubby Checker’s Let’s Twist Again. Further down the road, the music carried on in the Hakman’s Grand Hotel where Pat Blake and his ensemble of twelve held shows and on occasion, Rudy Cotton played his saxophone. However, popular lore has it that the hotel kitchen’s blackboard still has food orders for ‘Hungarian goulash and vegetable jalfrezi’ dating back to 6th August 1945. Wonder if it got served? Remember that on that fateful day they dropped the ‘Little Boy’ on Hiroshima. ‘All you have to do to spoil a perfectly good meal is to go and check out the kitchen,’ my friend the author Bill Aitken reminds me. Water supply has always been an issue in the hills and to attract tourists, the hotel had put up banners; hoardings and distributed pamphlets all over the hill station announcing: Running water in every room. True there was plenty of water but most of it came down from the ceiling! In the age coal-fired boilers, steaming hot water issued forth in one room but was cold in the other. Often guests would be running in the corridors, exchanging buckets with each other. Library’s rambling edifice of the Savoy faced similar problems. But my friend Nandu Jauhar, the then–owner, ignored them. He was into beauty contests: Miss Mussoorie, Summer Queen, May Queen, June Queen and when they ran out of names, there was always Jungle Queen to fall back on. Pageants to the left; pageants to the right; and entertainment was guaranteed. I have a sneaky feeling this is where ‘match fixing’ was invented. Sponsors tipped off judges that some petty official’s wife (who despite her nashpati shape) was to win. On a summer’s night in the late 1980s, I was witness to the Swan Song of all our beauty contests. Around me, the ballroom overflowed with freeloaders hovering around when to the sound of drumbeats, descended Luscious Lola, a cabaret artist from Calcutta, who despite despite all the denting and painting, was but a shadow of her extreme youth. A collective gasp issued as she flicked a flimsy stole over an old man in the front row. The MC announced the third prize to Mrs. Chopra – a local shopkeeper’s wife – who happened to be was the prettiest lady in the ballroom. On hearing her name, she was stunned. Her husband livid. How could she have come last? Protesting, he clambered up the ramp, kicked the prize – a black-and-white TV – off the table. She did try to calm him down; she did try to save the remains of the day but all in vain. Seven sails in the wind, he was not listening, and dragged her out through the backdoor. I must hand it to the gifted Goanese pianist for saving the evening. His dainty fingers continued to tinkle the ivories of that queen of musical instruments. If you looked closely you would have found that made in Stuttgart, at the turn of the nineteen century, it had been carried here by the sturdy hill folk all the way from Rajpur at the base of the hill. For in Germany, during the First War, standup pianos were ripped apart for their wood and used to shore up trenches in the battlefield. Meanwhile, by the 1980s, our Queen of Hills had well and truly become the Hill of Queens.