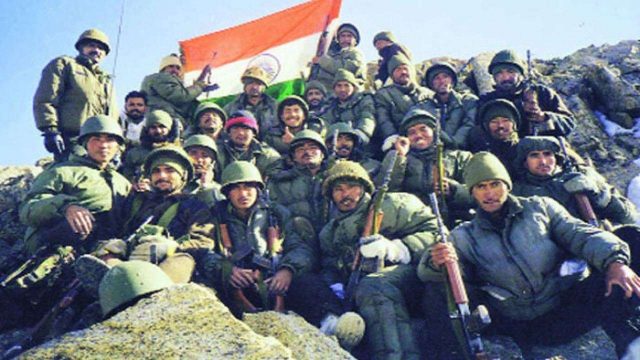 By Lt Col BM Thapa (Retd)
Dehradun, 25 Jul: Twenty-two years ago, on 26 July 1999, showing great courage, indomitable valour, steely grit and unshakable determination, India’s Defence Forces recaptured every inch of the mother land and killed every Pakistani infiltrator who had deceptively and treacherously occupied the top most features like Tiger Hill, point 4875 and other hills in Kargil.
During this war, 527 Jawans, JCOs and Officers achieved martyrdom and over 1363 were seriously wounded and disabled. This war was fought at the heights of over 14,000 to 16,000 feet in the most inhospitable, rugged, tough and steep mountain ridges. World history will always recall how military operations were launched and victory gained in such a short span of time in such difficult terrain and altitude on the lofty mountains.
For the bravery and valour of our soldiers “who sacrificed their today for your tomorrow” the President of India awarded four Param Vir Chakras (PVC), two posthumously, nine Maha Vir Chakras (MVC), six posthumously, and 55 Vir Chakras (VrC) and many more gallantry awards.
Capt Vikram Batra, 13 JAK Rif (posthumous), Lt Manoj Pandey, 1/11 Gorkha Rifles (posthumous), Grenadier Yogender Singh Yadav, 18 Grenadiers, and Rifleman Sanjay Kumar, 13 JAK Rifles, were the recipients of the PVC.
The Pakistani intruders had positioned themselves on Tololing Top, Tiger Hill, Pt 4875, Pt 4590, Pt 5100 and Pt 5140. The names of these hilltops became familiar to the people of India as these were getting reported in the Press and Electronic Media during the successes of the Indian Forces. Capt Vikram Batra played a sterling role in the capture of feature Pt 5140, a critical peak from the point of view that it overlooked the Srinagar – Leh highway which was important for logistics and supply of reinforcements for the Indian Army. Its capture facilitated the subsequent capture of other hill tops, i.e. Pt 4750, 4875 and Tiger Hill and finally led to India’s. After the capture of pt 5140, Capt Vikram Batra radioed his commanding officer and said the success signal “Yeh Dil Mange More”, which made the entire nation admire this war icon. Let’s join hands to salute the heroic braveheart martyrs of the Kargil War.

Garhwal Post has established itself as a credible, balanced and forward looking newspaper in India. Based in Uttarakhand, the daily is read by the aware, socially and culturally responsible, high-income elite of society.
Contact us: info@garhwalpost.in
https://garhwalpost.in/speaky-dating-app/ meetup charleston best place to meet singles in fort worth