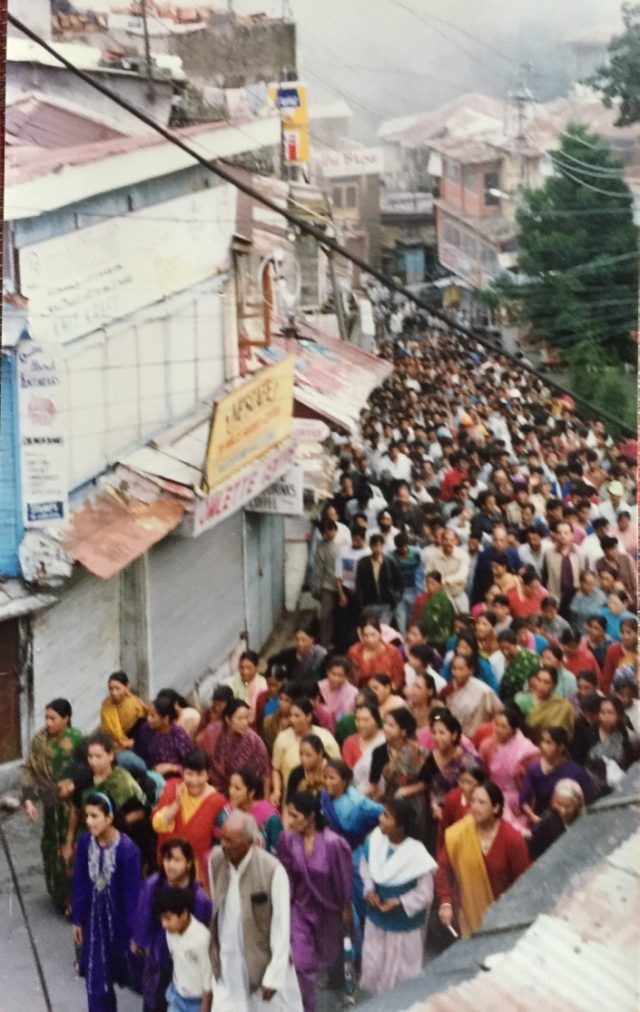 ‘ Write about it Ganesh!’ Author Alan Sealy had once exhorted me. ‘Don’t wait too long! It will soon be forgotten or worse, told by those who know nothing about it!’ How I wish I had listened! But anyway for what it’s worth, try I must. First a recap: The movement for a separate state to be carved out of the hill districts of Uttar Pradesh began not with a bang but a whimper. An anti-reservation stir of 2 August, without a nod; without as much as by-your-leave, suddenly twelve days later changed track setting our hills ablaze. All of us (except ‘we-are- guests’ or ‘stick-in-the-mud’ types) were swept along by a flash flood of rallies, processions, dharnas and Newspaper Clippings bandhs under the banner of a unified Sanyukt Sangharsh Samiti or a Joint Action Committee cutting across party lines. As I write, the slogans ring in my ears: ‘Jai Uttarakhand! Aaj Do! Abhi Doh! Uttarakhand Raj Doh!’ and ‘Jai Badri-Jai Kedar, Uttarakhand ki ho Sarkar!’ Last Monday, exactly twenty- five years after the tragedy, I returned to the site of the Mussoorie Massacre – the Children’s Park – to what is now the Martyrs’ Memorial. I had expected to see a crush of people. But it was not to be. September 2, 1994 is a day etched in collective memory. And it was no ordinary day. For try as much as you would, you could not have ignored the troops bristling with antiquated World War Two .303 rifles massed around Jhulaghar. This was where a few folks had come to offer homage to those martyred in Khatima a day ago. By 9.30 a.m., forty-seven top activists were placed under arrest, herded into trucks and trundled off to the police lines in Dehradun. Little did they know the ‘special’ VVIP treatment that awaited them. All of them, the young and the old, were mercilessly thrashed by apprentice recruits. Later, at midnight, they were taken on a terrifying drive through the dark that ended in Bareilly Jail. One shudders to think of the carnage, had the younger firebrand leaders not gone off to Pauri as participants in a mega rally. All those who were left behind were mostly housewives, young children and old men. They marched to Jhulaghar – the old protest site – now converted into a police camp. By noon, things came to a head and boiled over. Gunshots rang out as the Provincial Armed Constabulary opened fire on unarmed protestors. The whine of sirens wailed the rest of the story before it was told. Trouble had arrived. We raced to the hospital. ‘Police firing! Seven – including a police officer – are dead! Injured are being brought here!’ Breathlessly we stuttered. ‘What can we do?’ pale as a sheet, stammered the hospital administrator. ‘There are only three doctors!” ‘Use the phone!’ someone waffled. Call it luck. Call it chance. Call it whatever you may but the landline worked. Six doctors, visiting their school going children, were traced. Among the survivors of the shoot out, eighteen had bullet injuries and they received the best medical aid. Laying its stores in advance, a school had sent its van to trawl the chemist shops for life-saving drugs. In the corridors, volunteers donated thirty-four units of blood. As a result, not a single life was lost. Only Rajendra Panwar, that fine fluff of a boy, had a shard lodged close to his heart, and was the only one referred to a higher centre. At sunset, a police jeep did its rounds, droning: ‘Mussoorie is under curfew!’ So, in a single day, a hill station that had never in its entire existence seen a lathi-charge, saw it all. Of course nothing would ever be the same again. The point of no return had been crossed. As I write, there are some fifteen thousand beneficiaries of statehood pensions. Only a handful turned up to pay their respects. To say it was disappointing, is, at best, an understatement. ‘Maybe next time we should try freebies! Announce giving away free blankets, jugs, mugs or bugs!’ suggested one old timer. At times like this, one wonders if heroes like Belmati Chauhan, Hansa Dhanai, Balbir Singh, Rai Singh Bangari, Madan Mamgain and Dhanpat Singh await another dawn?

Garhwal Post has established itself as a credible, balanced and forward looking newspaper in India. Based in Uttarakhand, the daily is read by the aware, socially and culturally responsible, high-income elite of society.
Contact us: info@garhwalpost.in
https://garhwalpost.in/free-hookup-sites-in-michigan/