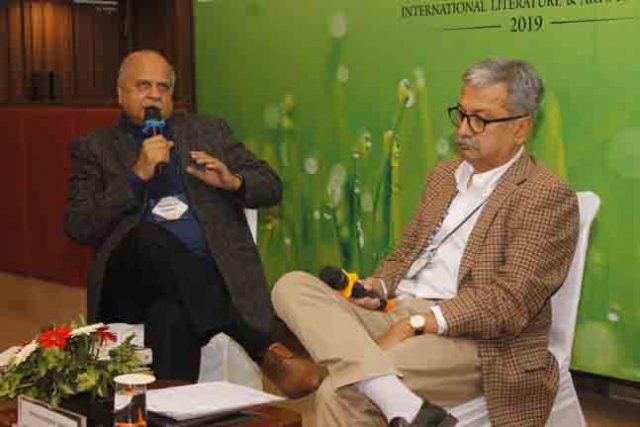 DEHRADUN, 16 Nov: The second day at the on-going the Valley of Words Literature and Arts Festival, witnessed several book launches, discussions and other events which had engaged and enlightened the audience. One such interesting session was the launch of Raghvendra Singh’s seminal transfer of power scholarly book, “India’s Lost Frontier: The Story of The North West Frontier Province of Pakistan”. The five hundred page work of exceptional and diligent research is the hallmark of Raghvendra’s book that describes the twists and turns in political one-upmanship that brought about the close of an unpleasant chapter of India’s partition saga. In discussion with Pradeep Singh, the Dehradun based author and historian, Raghvendra captured the audience’s attention and curiosity with his lucid and effortless narration of the key elements that were central to the conundrum that was the outcome of the Indian national leadership’s desire to have a united India post transfer of power in August 1947 and the manipulation and machinations of the British to scuttle these efforts in the pursuit of partitioning the country on flawed notions of a religious divide in India’s social fabric! Raghvendra stated how the book exposed the ulterior motives behind the British administrative machinery to see that the geopolitically sensitive region of the North West Frontier Province merged with the proposed Pakistan rather than with India despite the province voting in 1946 a non-Muslim League government lead by the Indian National Congress! The discussion also broached the individual role of some key personalities like Khan Abdul Gaffar Khan, Jawahar Lal Nehru, Md Ali Jinnah and also the British persona dramatis the two Governors of the province, Olaf Caroe and George Cunningham who were partisan to the cause of Muslim League with the hidden agenda of controlling the strategically vital region of the NWFP. These two Governors aided and abetted Jinnah’s single minded agenda to get a separate Muslim majority state even if the state would not be economically viable. The panelist, Pradeep Singh, recounted a few poignant moments in the book that evoked an emotional response from the audience as there was enough human drama amid the turmoil.

Garhwal Post has established itself as a credible, balanced and forward looking newspaper in India. Based in Uttarakhand, the daily is read by the aware, socially and culturally responsible, high-income elite of society.
Contact us: info@garhwalpost.in
https://garhwalpost.in/bicupid-dating-app/