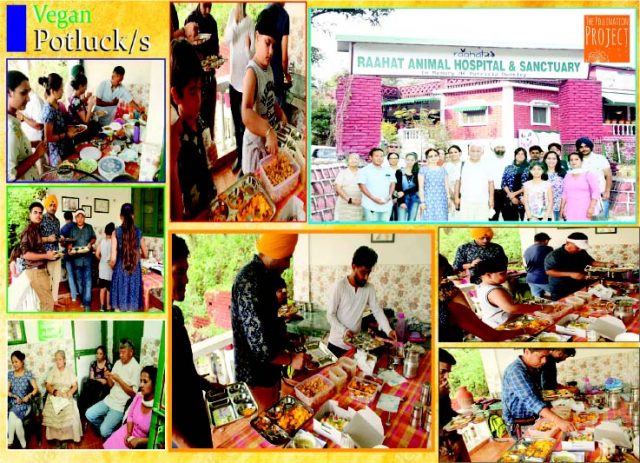 By OUR STAFF REPORTER
DEHRADUN, 23 Jan: A seed grant of $1000 by ‘The Pollination Project’, a US based Non-Profit, has lent a major boost to the efforts to make veganism mainstream in Doon. Animal rights activist Yeshi Kalsang, who was awarded the grant, utilised the funds to set up a vegan community centre and animal rights library at the Raahat Animal Sanctuary, the only such library of its kind not only in the state but perhaps in the country.
The library, inaugurated by Jessica Ava, Vegan Activist and Director of Grants Programme, ProVeg International, has been stocked with books and DVDs, all animal rights, animal welfare and vegan focused.
As part of The Pollination Project, vegan food sampling was organised for the walk in crowd as well as for government and private institutions. The vegan food samples were donated by Gooddot, an Indian startup manufacturing plant based protein products.
The school field trips and film screenings at the centre and vegan meet ups are also a part of the efforts to make veganism mainstream in the capital city.
Yeshi Kalsang told GP that the community space will help people to research animal rights theory and vegan lifestyles, as well as provide opportunities for vegan meet ups, film screenings, school field trips, and a general place for vegans and animal lovers to congregate and build local vegan solidarity. The Centre is located at a sanctuary for farmed and other animals, so people who visit the sanctuary also get an opportunity to browse in the library.
When asked why a library at an animal rescue centre, Shanta, one of the volunteers at Raahat said, “Reading makes one more empathetic towards plight, cultures, customs; to put it succinctly, a better person; and, at Raahat, with all kinds of animals for company, it can be super fun too!”
The Centre Head, Dr Uttam Singh, disclosed that various other organisations and individuals have also contributed to the library, prominent among them being, Help Animals India.
The Animal Rights Library at Raahat is open to all who wish to experience the world of animals, research the animal rights theory and explore vegan lifestyle.

Garhwal Post has established itself as a credible, balanced and forward looking newspaper in India. Based in Uttarakhand, the daily is read by the aware, socially and culturally responsible, high-income elite of society.
Contact us: info@garhwalpost.in
free hook up calgary single christian dating app older capricorn man younger aries woman