At the Lal Bahadur Shastri Natonal Academy of Administration, Mussoorie outside Karamshila building on a pedestal stands a grand granite bust. Glance at it and it will stare right back at you. Below on a plaque are the chiseled the immortal words of Sardar Vallabhbhai Patel – the Iron Man of India – who said: ‘You will not have a united India, if you do not have a good All India Service which has the independence to speak out its mind.’ One can only shudder at the chaos had he not held his ground against regional satraps. They wanted each state to have its own civil service.
Unwind history’s scroll to colonial times where the Indian Civil Service or the Heaven-born came into being in 1858 when all the territories acquired by the East India Company were taken over by the Crown. From that point on, selections were made entirely by competitive examination, but subject to an interview. In the transition years, the older Oxbridge-type men spoke disparagingly of the new ‘competition-wallahs’ in the mistaken belief that eminence in learning would only fit them for excellence in desk work. Fortunately, Time proved them wrong.
For the total number of the ICS at any one time varied between just under 1000 and 1300. They administered ten provinces varying in size from 97,000 to 1,70,000 square miles – each one larger than the United Kingdom. Members of the service held nearly all the highest posts. One civilian, assisted by one or two junior civilians and half a dozen Indian subordinates, along with a Police Superintendent and his subordinates, maintained law and order as also dealt with the hundred and one matters that cropped up every other day. 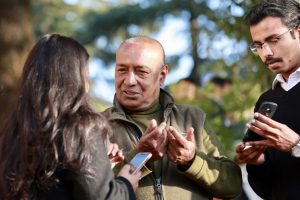 ‘The capacity of a civilian’s mental power should be similar to that of the elephant’s trunk, which can pick up a pin and pull down a mighty forest tree.’ Or so we have been told. In the late 1950s, the Administrative Academy began its journey from Metcalfe House in the Civil Lines of Old Delhi to these hills.
Narendra Sahani, an old resident tells me: ‘We arrived here on the night of August 28, 1959.’ Adding: ‘My father was working in Metcalfe House.’
If one were to compile a list of all those who have been through its portals, it would be thicker than a telephone directory. For it would include the Vice President of India, Chief Ministers, Cabinet Ministers, Ambassadors, Police Chiefs, writers, poets and a host of others who form the proverbial ‘Steel Frame of India.’
I guess its high time for a disclaimer. I am a rank outsider – who has on occasion taught young probationers to inculcate a hobby. I have been a mentor, trying to teach them to take better pictures. Over the years, I have seen bushy-tailed probationers arrive in the middle of the monsoon and leave at the end of the fall. The first thing to get sandpapered is the euphoria of having cleared one of the toughest exams in the country. But make no mistake, each one is as bright, if not brighter than the other.
”What is it like to teach them?” I have often been asked me.
”It’s like walking into a bunch of academic Dhonis”
Each one is an expert at their own helicopter shot – adept at sending the ball flying over the boundary as if possessed with a mind all of its own. Bumping into a new foundation course is to walk into a collage of India: safari suits come from small towns; and city slickers with their bold and the brave fancy jeans, fancier shoes, and fanciest shades.
If you go looking for them a few weeks later, you find that the blender of training – packed back to back from dawn to dusk with jogging, physical training, horse-riding and back-to-back classes on diverse subjects ranging from land reforms to officer-like-qualities – have changed them all. Each one will set off to the remotest corners of the country to become a part of the steel frame of India.
Read The Steel Frame for an insider’s view of how the ‘system’ works.

Garhwal Post has established itself as a credible, balanced and forward looking newspaper in India. Based in Uttarakhand, the daily is read by the aware, socially and culturally responsible, high-income elite of society.
Contact us: info@garhwalpost.in
dating websites free for women dating app international free