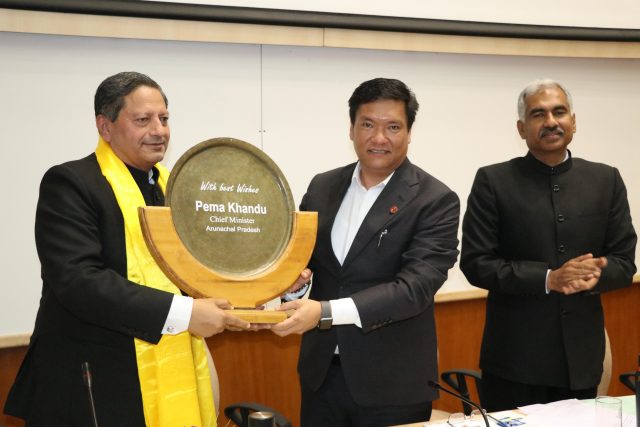 The Lal Bahadur Shastri National Academy of Administration, Mussoorie, played host to two very eminent speakers in, both, the Foundation Course and the Phase IV last week: we had Chief Minister of Arunachal Pema Khandu and the Foreign Secretary, Vijay Gokhale, and the frank and candid conversations which the officers had with them really helped everyone understand the geopolitics of the region, especially in the context of the Look East Policy, India’s equations and issues with China, and the practical steps that could be taken to give greater teeth to this policy. First, some interesting facts. Pema Khandu is perhaps the youngest CM of the country, and Mr Gokhlae is the seniormost civil servant – belonging as he does to the 1981 batch. And, although the two did not have the occasion to meet, it was interesting to note their perceptions and world views – for while Mr Gokhale gave us a broad overview of India and the world, Mr Khandu spoke about the reality on the ground, the ‘here and now challenge’ from China on the 1500 km long border with ‘Tibet China’, rather than China, and he urges a change in our nomenclature to describe the region. He also felt that while Arunachal was perhaps the finest example of integration with India – every tribe has retained its identity and dialect – but had also adopted Hindi as the medium of communication. He put it so well: ‘The left and right of the grammar may be different – but the meaning was conveyed quite clearly’. He spoke convincingly of the need to have a separate cadre for Arunachal Pradesh to ensure institutional memory, besides giving an equal and fair opportunity to officers who were born and educated in Arunachal to opt for the state cadre. Under the current dispensation, even officers domiciled in Arunachal are part of AGMUT cadre – and hardly get the opportunity to serve in the state. Given the fact that, in geographical terms, it is one of the largest states in the country – with an area bigger than Bihar, the highest hydro reserve in the country and the longest border with Tibet China – there is merit in the argument. Another point which made a lot of sense was the need to have at least two time zones in the country – for the entire Eastern region, the 9-30 a.m. – 5.30 p.m. schedule does not make ecological sense. Even in Kolkata, so many daylight hours are lost because from mid- November to mid-February, it is dark from 5 p.m. onwards, and in the case of Arunachal, dusk sets in even earlier. And for a region where the sun rises at 3.30 a.m. in summers, the best part of the morning is lost if schools and institutions follow the IST. If the US can afford four time zones, we can surely do with two time zones at least! The Foreign Secretary’s address looked at India’s role in the world. He was of the firm view that a nation of India’s size had to engage with the world in economic, political, strategic and humanitarian spheres, and that an inward- looking policy was not the best option. Even as he ably defended India’s withdrawal from the RCEP, it was clear that he counted the benefits of globalisation not just for India, but for the world, as it led to optimisation of resource use, development of domain competencies and better integration. But he also pointed out that they were major challenges as India was coming of age at a time when most of the developed economies were in the grip of a slowdown, China stood on a stock pile of inventory of manufactured goods, and the US policy was also becoming more restrictive. However, there was also an opportunity on account of Sino-US tensions and India could leverage this advantage. It was also very clear from his address that India was now making national sovereign interest as the prime objective of its foreign policy, and the ideological dispositions that governed India’s policy on non- alignment, and staying away from the two power blocs were no longer relevant with the collapse of the Soviet Union and the end of bi-polarity. In fact, we have taken longer to come to terms with the newer institutional arrangements like BRICS to G 20 to ASEAN and BIMSTEC and make our presence felt on the global stage. He was very appreciative of the Academy’s engagement with the training of civil servants from the neighbouring countries of Bangladesh, Myanmar and Maldives – this was a wonderful way of bringing the key stakeholders of the region together for a discussion on issues that made the most difference to lives of people: governance, development interventions and institutional reforms. Mr Gokhale fielded all the questions with aplomb – these ranged from India’s soft power to our position in the UN, especially with respect to the UNSC, and the involvement of services other than the IFS in the diplomatic outreach of India. He specifically mentioned that gone were the days when ministries and state governments could work in silos – for the distinction between the foreign and domestic was no longer watertight. States were playing an important role in foreign policy – and whether it was the Kartarpur Corridor, or the sharing of Teesta waters or the rehabilitation policy for Tamils in Sri Lanka – Punjab, West Bengal and Tamil Nadu were clearly involved. And the Look East Policy required the strategic support of all the states in the NE. The setting up of Videsh Bhawans in all state capitals also meant that state governments would be engaged with the MEA on a range of issues – from investments in industry and services to collaboration in culture and outreach with OCIs and PIOs from the state. It was a week in which officers got very wide ranging inputs which covered a wide span. And, of course, a much clearer perception about the LEP!