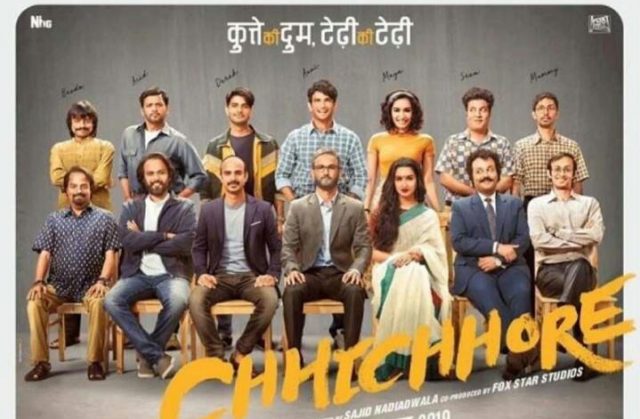 Chhichhore in English means flippant, carefree – the ones with not a serious attitude. Nitesh Tiwari, Dangal fame director and co-writer of Chhichhore creates nostalgia, an energetic atmosphere that is vivid, majorly brought about by the students of a prestigious Engineering college while addressing a raging issue of pressure on students to enter a good professional college. It is made contagiously bubbly and is full of age-appropriate boyish talks (comprising topics like girls, magazines, harmless ragging and competition). The ecosystem is a typical government hostel with moulds on bathroom tiles, unappealing look, dirty doors, pigeon-hole sized rooms, shabby walls, food that is not much relished and much more. Those who have lived in hostel will instantly connect with the sweet intentions of Tiwari. The film transports one back to good old college days, where strangers from vivid backgrounds meet, bringing in their unique flavour in terms of habits, accent, behaviour, way of dressing, etc. and they become one united family. How easily they learnt all the life lessons through their interactions with the variety of students, some docile, others bullies, few studious while others addicted to some vices – is captured well. Chhichhore makes one bask in the exuberant campus life of college except that when the friends reunite after years, it’s over a sad event. One of the friend’s son met with an accident and the tragic moment brings them together where they narrate their college experiences to the child who has lost all will to live. They relate the present challenging moment with what they faced then. Life’s trying situations are almost similar and each one of us has one’s own way to handle a problem. To emphasise this point, the dialogues of the past are repeated in the present while they handle the present gruesome affair with the traits that college life taught them then. Sushant Rajput, as Annirudh, as a college fresher and as a father of a Grade 12 boy, performs both the roles with ease. We have seen the better side of an actor in him in earlier films. Shraddha Kapoor as Maya, girl-friend and wife to Annirudh looks beautiful and is much more appealing than her contemporary college lads, who look quite outdated against her. Her role doesn’t give her much space to show her acting prowess. Over and above, it is the supporting cast of Chhichhore that steals the show. The ragging, interactions with parents in the rooms and college staff while allotting hostel, college rivalry, the first taste of liquor; all is presented with brilliance. Varun Sharma is tailor-made for his role as ‘Sexa’. He moulds himself into the character just as cork fits in a bottle. He is a delightful watch and is hilariously called, ‘Hawas Ka Papita’. Most of the time, the major component of his talks prove the title bestowed on him. He has interesting erotic magazines spread under his mattress providing perennial supply of desirable material. Naveen Polishetty as ‘Acid’ can’t speak a word without spitting venom, yet nowhere he goes overboard. The acid flows naturally and that is what makes him likeable. The juicy one-liners are enjoyable and the cast nowhere resort to theatricals. If Prateik Babbar fills the air with his controlling attitude and shades of arrogance and bullying, Tushar Pandey as ‘Mummy’ make us savour his puppy-like docile and submissive reactions. Tahir Raj as Derek, the leader of the Hostel 4 gang and Sahrash Shukla ‘bewda’, a genius, a master class chess player yet a drunkard; both present two different kind of personalities in their respective roles. The film turns out to be an average watch. The shadows of many films keep haunting. The lack of novel ideas, the seen-before-tale, bad make-up (especially when the cast is in their forties), the unappealing sports scenes, the repetitive conversations with the doctor in the hospital; all mar the fineness it required to outshine. Despite all this, the catchy one-liners keep the smile on the face throughout. Wherever the movie sulks, a bubbly scene lifts it up in the following shot. What I liked about the story is the way it links the accident and the recovery phase of the boy with the championship held in the college where this gang of ‘losers’ (occupants of Hostel 4) participate. Led by Tahir and supported by Sushant, they try hard to erase this derogatory title. The methods they use to win are interesting but practically unfeasible. It is an event that remains the weak zone of this rakish assemblage of self-satisfied souls who decide to take the challenge head on irrespective of the consequences. It is this story that they narrate to the ailing boy. The music by Pritam Singh is good but not remarkable. The college attire and looks match with the time taken into consideration. What is disappointing is the prominent receding hair line and weary looks they wear in their early forties looking older than their age. It is distracting. The director seems to have forgotten that people maintain themselves well these days. Quite disappointing for young boys to visualise their future looks! The make-up artist maintains his soft corner for women. Shraddha’s make over is graceful. She looks utmost desirable even in her mature phase in cotton sarees and suits. Tiwari makes the college days float in memories. While maintaining the focus on the humour, college fun-n-frolic, gossips, block wars, ragging, rifts, tiffs, friendship, and extra-curricular activities, it has strong message to convey to parents. In the mad race to seek admission in competitive entrance examination, parents forget to discuss about a future plan with kids if the plan A fails. Preparing the child for failure is what many parents lack in their parenting.

Garhwal Post has established itself as a credible, balanced and forward looking newspaper in India. Based in Uttarakhand, the daily is read by the aware, socially and culturally responsible, high-income elite of society.
Contact us: info@garhwalpost.in
dates holy week 2022 https://garhwalpost.in/dating-vs-exclusive-relationship/