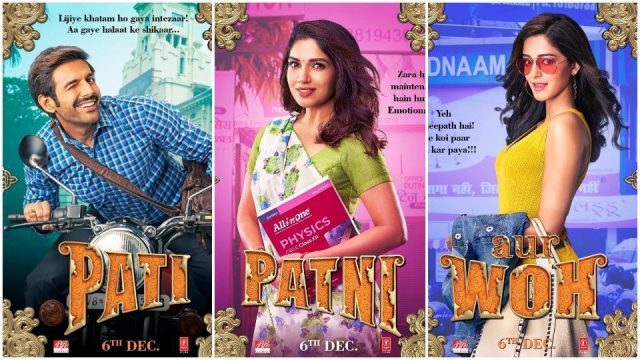 Mudassar Aziz directed Pati Patni Aur Woh keeps BR Chopra’s 1978 film’s title and basic theme intact but re-tunes it as per the modern context’s requirement, keeping in mind the contemporary relationships, changing times, evolved society and empowered women. If the original movie emphasised that only men can have all the fun, they feel suffocated after few years of marriage, they can easily explore an interesting territory once the daily humdrum of life sets in and the honeymooning phase is over, then this one has pondered over a different perception conveying that women are smarter than men and they too have options, rather more than men to make their life interesting, if moving out with other men is what defines happiness. An interesting point that Aziz reiterates through the main female cast in a dialogue, ‘Zamanna kultaaon ka hai’ along with a sincere lesson wrapped in comedy.

A middle-class man Abhinav Tyagi (Kartik Aaryan), from Kanpur, son of a strict father is eligible for marriage as soon as he picks up a job. Vedika (Bhumi Pednekar), the girl chosen by his parents, is a spirited, fun loving person who has no hitch in sharing her past boyfriends and sex life. Tyagi accepts the proposal despite the girl’s mentioning that she is a little high maintenance. He is completely flabbergasted by her attitude and they join in wedlock. Three years into marriage, the cold vibes hit the couple. The monotony diminishes the spark. The tiffin which had once quite a few items is reduced to a plain sandwich. The wife picks up a teaching job and is busy in her own work. In all this weariness, Tapasya Singh (Ananya Panday), a beautiful smart Delhiite, designer by profession makes a breezy entry in Abhinav’s office. Interestingly, a few showers of praise from her are enough to sweep his feet off the ground. He enjoyed her courtship. He paves way for her by narrating a sympathetic story without realising the repercussions. His dear friend, Fahim Rizvi (Aparshakti Khurana), is well aware of his flirting encounters with the new flame in his life. He warns him on and off yet supports him unconditionally whenever his friend is stuck in a tight spot. All this he does while infusing many jocular moments into the conversation making the viewing experience scintillating.
Very soon the hidden association comes to surface and the interesting twist comes in, in the story, quite different from the original film. Vedika displays the signs of a ‘rebel’ and handles the situation with utmost grace and wisdom. The reactions of the parents after knowing the facts have been captured in a bone tickling way making the overall atmosphere light contrary to the grave situation the characters are in.

Bhumi lends an energetic charm to her role, mostly clad in a saree and a lucknowi accent on her tongue. She doesn’t let her attitude fade even during emotionally tumultuous situations, quite comfortable in her skin. Kartik Aaryan, a self-satisfied man, happy to have been born and settled in Kanpur, wears unappealing check shirts, a moustache, a funny walking style and laughter. Vedika is the one who longs to move to Delhi. She is a modern thinker, the one who can carve her own path, handle an awkward 19 years old student and her admirer, who writes poems, and stays in a dreamland fantasising a bouther while she is teaching.
The outstanding performer in the film is Aparshakti Khurana. His quirky dialogues, superb comic timing and amiable screen presence wins hearts. His short crispy one-liner analogies are relishing. The overall use of shudh Hindi language by mostly all the characters along with the real feel of Kanpur lifestyle, people’s behaviour, the bazaar, the shops, the shopkeepers, the way of dressing let one experience a typical Uttar Pradesh flavour. The other character who leaves a mark is Shubham Kumar as Rakesh Yadav. His presence is pleasing. He has a strong crush on Vedika. His exchanges with her are fresh and hilarious. The urge to see and hear him more remained an unfulfilled wish. Neeraj Sood as Mausaji fills the gap with his unique style and typical middle-class’ middle-aged mannerism.
Ananya Panday as Tapasya Singh, a girl from Delhi, who comes to Kanpur to look for a piece of land for her factory carries the oomph factor. How and why she falls in love with not-that-appealing Tyagi remains an unanswered question. She is a fashionista and he is an ordinary man. He neither has a charismatic personality nor a good dress sense nor classy mannerism and he is a married man. Or if love is beyond all this then it should have been conveyed well. This is where the script misses out crucial moments. An intelligent thought was needed to make it an intriguing story. There are many other unexplored areas where it jumps the gun, sulks in the middle then picks up in the end.
Overall, Pati Patni aur Woh is a fun-filled, entertaining movie made in light vein, highlighting the trend in society and sharp-wittedness of girls. It is a fresh presentation of the old tale, wrapped in a new packing and given a taste that will be liked by the younger generation. It needed deeper pondering in the issue but hurriedly touches it to make the audience laugh mostly through the acting and dialogues.