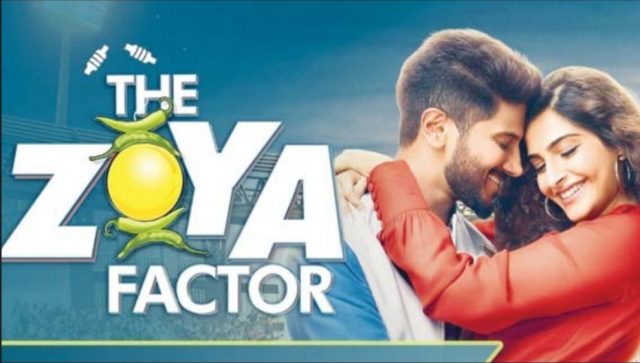 The Zoya Factor is a cocktail of sweet romance, good acting, frothy story and mild comedy. It also works upon shunning the common superstitions that most of us follow which at times introduce insecurity to our self-worth. The Zoya Factor is based on chick-lit genre novel by Anuja Chauhan. Zoya Solanki (Sonam K Ahuja) is born on the historic day in 1983, when Indian cricket experienced the most triumphant moment by winning the coveted world cup for the first time. Her father, an ardent cricket fan gave all the credit of the victory to his daughter Zoya being born on the same day, considering her to be the ‘lucky charm’ for cricket. Zoya works as a junior copywriter in an advertisement agency. She is shunted by her wealthy boyfriend and is continuously embarrassed at office. Her personal and professional life sucks. She is sent to shoot the Indian Cricket team for an ad where she accidently meets the charming captain of the team, Nikhil Khoda (Dulquer Salmaan). There is an instant connect. At the breakfast table, Zoya, makes it known to all about her luck factor that brought victories to cricket matches. The story goes down well with a team in poor form and low morale. The team is in a gullible mental state ready to accept anything that could bring victory. In minutes, Zoya is in great demand. Surprisingly, there is a sudden series of victories and the cricket-crazy nation worships her like goddess. The emotional dependency of the team on Zoya rises and this doesn’t go well with Nikhil, a man who gives utmost weightage to self-efforts. As a captain he sees his team falling into the luck trap. He tries to convince the team to pay more attention to preparation rather than leaving everything on luck. Unfortunately, the team continues to drift towards the luck factor. Hilariously, it reaches a point where the cricket team management offers her to officially join the team as the lucky mascot. She is in a fix whether to accept the offer or not. All this also ends up in bitter-sweet clashes between Zoya and Nikhil. It’s not that the story completely sweeps in the unsubstantiated ‘belief’ zone. The director does try to provide alternative reasons responsible for victory in various matches to not make it sound like a completely unfounded story. Dulquer Salmaan displays his emotions brilliantly. His infectious smile, intellectual expression, calmness in his bearing and appealing physique wins all hearts. He presents himself as a blend of a dedicated sportsperson and a strong leader. He carried a genial presence in his debut Bollywood movie, Karwaan. The hard work to transform into the role of Nikhil in this one shows in the affable personality he lends to his character. Sonam as a nitwit plays her part with ease. She has handled such goofy roles earlier too. She is stylish but her dress sense goes overboard not in sync with her character’s approach. The chemistry between Sonam and Dulquer is adorable. His amiable smile and affectionate expression in eyes – both are enough to sweep one off the feet. Sonam responds appropriately to this with her amazing comic timing and apt expressions. They both light up the screen whenever they are together. The amount of screen space they shared, more was expected from them but the contained presentation hindered with the wish to explore their romantic trips. Dulquer has few exquisite dialogues that have been delicately braced by the supporting staff – not to tamper the fragility of emotions depicted in those particular scenes. Sanjay Kapoor as Zoya’s father and a focussed cricket lover does full justice to the cricket craziness he owns. Sikander Kher as Zoya’s brother and protector has few interesting scenes. Angad Bedi as Robin, ex-captain of the team matches with his swag. Manu Rishi, the manager of the team adds comedy-cum-antagonist angle through his short but impressive shots. The cricket commentary in Hindi may have been added to generate laughter but fails badly. It dedicatedly runs on a comedy trip, an odd behaviour from the world cup commentators. The talented director Abhishek Sharma of Tere Bin Laden fame plays a balancing act between superstitions and hard work in The Zoya Factor. He succeeds faintly in the mission. He excels in the romantic moments between Zoya and Nikhil while the film grapples to maintain pace especially in its second half. Shankar Ehsaan Loy music is average with forgettable songs. The Zoya Factor has been made in light vein but does give a glimpse of serious conspiracy and challenges in the game of cricket. Cricket is a game that unites everyone especially in India. We all have witnessed the innumerable funny practices of cricket fans to make India win during a match whether it is nervously clinging to a designated spot or not moving a particular limb. Many wear a lucky dress or switch on the television set with a right hand using a particular finger. Despite all these fruitless efforts, India has seen victories and defeats both. Mostly it’s the strategy, team work and dedication that has borne results. This is what the film’s story underlines. It’s a fun one-time watch for the charm of Dulquer and breeziness of Sonam with occasional cricket chops to relish.