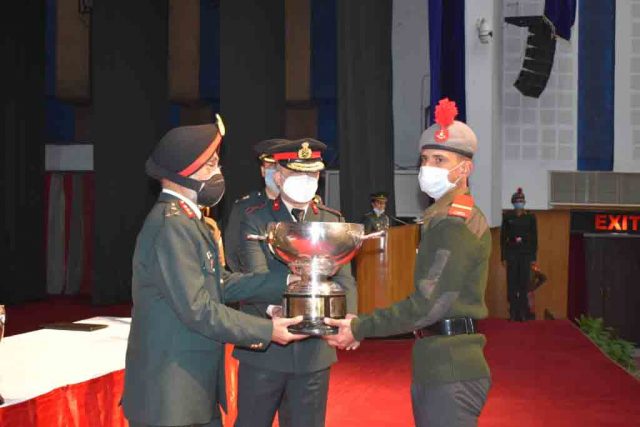 Dehradun, 9 Dec: Awards are a true recognition of the achievements of the Indian Military Academy Gentlemen Cadets and acknowledge their pursuit for excellence not only confined to academics but encompassing the whole range of activities that make for a well rounded and balanced training. The Award Ceremony of the Autumn Term-20 Passing Out Courses comprising the 147 Regular Course and 130 Technical Graduate Course was conducted at the Khetarpal Auditorium, IMA, today.
Gentleman Cadets were felicitated by Lt Gen Harinder Singh, Commandant, Indian Military Academy. He bestowed medals and awards to the outstanding Gentlemen Cadets who excelled in various fields during their pre-commission training at the Academy.
The training imparted to the Gentlemen Cadets at the Indian Military Academy is designed to provide a comprehensive knowledge of military fundamentals and leadership, as well as proficiency in basic military skills. It aims to develop the qualities of character, intellect, fitness and competence needed by future ready officers, who at all times in their careers must be prepared to lead.

While the COVID-19 outbreak disrupted training in most educational institutes in the world, Indian Military Academy implemented an effective COVID action plan integrating all preventive guidelines outlined by Ministry of Health, Army Headquarter and Army Training Command.
It was ensured that there was no dilution in training standards of the Gentleman Cadets, even as all precautions were taken and a healthy routine evolved for them. It is pertinent that IMA showcased its standards in an impressive Passing Out Parade during June 20 despite all COVID constraints, which was widely streamed across media including record live viewership on social media. Parents and relatives are this term looking forward to being present for the Parade and share the joy of this ‘Once in a lifetime experience’.
The Commandant’s Prize Distribution and Award Ceremony is an important event which recognises and encourages the Gentlemen Cadets to achieve excellence at the individual level and contribute constructively to team efforts to infuse a sense of camaraderie amongst them. Accordingly, Medals and Rolling trophies have been instituted in recognition of the highest standards achieved at individual and company level.
The Commandant, in his address, mentioned that the country demands willing, unhesitating, unfaltering obedience and loyalty from each young Officer. He further elaborated that leadership is composite of a number of qualities. Among the most important are self-confidence, moral ascendancy, self-sacrifice, fairness, initiative, decision, dignity and courage. In his address to the award winners, the Commandant also said it is important for an officer to maintain a competitive streak within the parameters of sportsmanship and fair play at all times. He mentioned that the urge to win and excel as a team should always be there. In the profession of arms, it is always a collective and a team effort that is important as there are no runners up in war. He commended all for having achieved such high standards despite the constraints and challenges due to the spread of COVID-19. He complimented the parents and dear ones of the award winners for being their strength and assured the course that their parents shall be sharing these proud moments of the POP with them. The Commandant wished the course all the success and glory ahead in the various arms and services allotted to them.