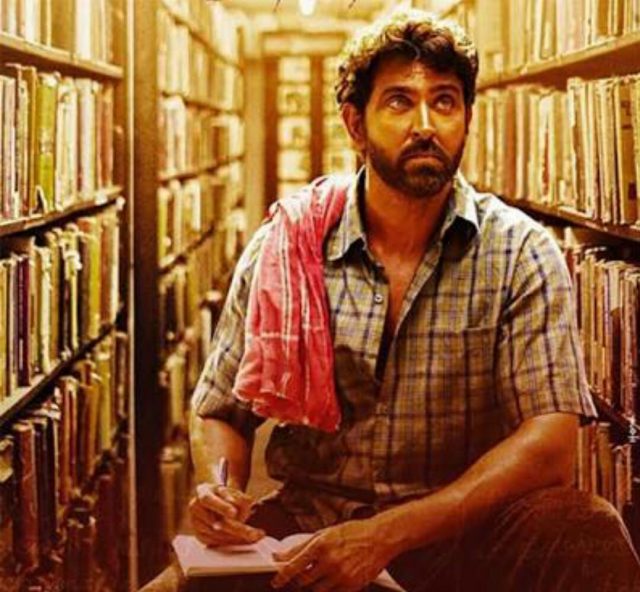 Raja ka beta raja nahin banega, raja woh hi banega jo haqdar hoga’, is a thought that springs from the belief of Anand Kumar’s father and later becomes his karam bhoomi. Super 30 has salubrious intention and applaudable cause that enlightens us with the commendable work done by Anand Kumar, a mathematician from Patna who transformed the lives of impoverished students by coaching them to crack the IIT exam while facing life threatening odds. The narrative, at every step, underlines the super transformative power of education to erase poverty from one’s life. It was quite astonishing to see the queer makeover of a stylish actor like Hrithik Roshan into a tanned, haggard, undernourished yet a super brainy man who could solve mathematics problems as easily as reciting the alphabet. Vikas Bahl has a strong story in hand, of a This underdog story has super intention, superb lesson but remains a miscalculated theorem man whose coaching centre has many laurels including a place in TIME Magazine in the list of Best of Asia 2010 and is the recipient of praise from US President Barack Obama’s special envoy who termed it as the best institute in the country. Super 30 has a heroic protagonist, who is every millimeter soaked in his character. The film shines at most of the places but remains an exhausting watch. It does touch the heart but occasionally. Many brilliant moments are delivered by Hrithik and he gives a polished performance displaying his acting acumen in abundance. A film like Super 30 required many authentic moments but it goes on a dramatic trip at various junctures – the movie loses its grip and the audience’s interest too. A scene where Anand instructs his students to enact a scene from Sholay in English for elite audience ends up being funny. The comical speech by the local MLA, Anand’s students confronting armed goons with the practical knowhow of science after being instructed by their own teacher to fight; all the artificiality spoils the viewing especially the way it is executed. On the contrary there are scenes where Hrithik strikingly shines. Anand is poor, he seeks financial help from the local politician for going to England, the kind of treatment he receives and his reaction to it can only be perfectly delivered by an outstanding actor like him. To mention another noteworthy act, the climax scene where he is thrown off balance after hearing the unbelievable result, he shows his best acting chops. Hrithik Roshan, unconcerned of his looks, enters the domain of an ordinary looking, poor Bihari man from Patna with confidence. The overdoing of makeup to mellow down good looks shows apparently. He struggles hard to get a knack of Bihari accent ending up in an unauthentic articulation. His acting remains top-notch and he successfully gives heart- bleeding emotions at various joints. Seeing a maths wizard like him, the best mathematician in Patna, who is offered admission in Cambridge selling papads wrapped in the letter of invitation from Cambridge; the heart bleeds. The sweet- cute family moments, the attempt to murder Anand, the students sharing their meagre rice with each other – shake one from within. Virender Saxena, Anand’s father, lends master strokes with his brilliant performance as a postmaster. He has the best dialogues and his chemistry with his onscreen wife is sweet to watch. Both as a pair along with Anand’s brother, Nandish Sandhu, constitute a supporting family and Virender’s dazzling performance makes it even more delectable. Some delightful pieces of writing written for Anand’s parents are truly relishing. Aditya Srivastava as Lallan Singh, the coaching centre head of the best centre in Patna is a delight to watch. The film is well-made, credit to the intentions but the annoying length and over dramatized treatment to few scenes and characters reduces the charm. Out of the thirty students, not even one’s rendition stays in the mind. I expected that at least a couple of them will leave a mark but all stayed ordinary. Nevertheless, the supporting cast nowhere disappoints. Amit Sadh as a journalist is convincing. Pankaj Tripathi remains a bonzer handler of all kinds of task, big or small as always. His first class performance in the brief role vouches for him. Music is not outstanding but is supportive. If Super 30 has some outstanding moments it does possess few weaknesses. The transformation in Anand’s personality from a teacher in a profit minting coaching institute to a no-profit centre for underprivileged is so abrupt and backed with undercooked background that it remains unconvincing. The sexual harassment charge levied upon Anand by his opponents too is handled in a lighter vein as if to tease the #metoo movement, highlighting the fake cases against men. The romance between a rich girl and Anand remained a distraction in the serious plot. More was expected of Super 30 in terms of class lectures, student-teacher interactions, background of students, their zeal and killing instincts to nail the exam. It’s good to see a passionate man with no means triumphing over the challenges that life throws at him and emerging victorious. His experiment deserves a respectable appreciation. Vikas Bahl and Hrithik let us peep into Anand Kumar’s life with their genuine intentions but fail to come close to reality. Instead of shooting in real Patna, it is shot in the sets created in studio and that diminishes the experience of real Patna life. More films like Super 30 need to be made that sprinkle lessons to society and glorify the personalities who have done things out of the box to selflessly help humanity. But the audience that looks for entertainment needs to be patient to stay for the lengthy watch and salute the man.

Garhwal Post has established itself as a credible, balanced and forward looking newspaper in India. Based in Uttarakhand, the daily is read by the aware, socially and culturally responsible, high-income elite of society.
Contact us: info@garhwalpost.in
polish dating website uk https://garhwalpost.in/singles-kansas-city/ meet bicurious women