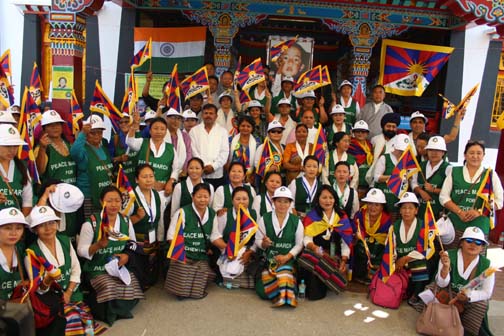 Mussoorie, 24 Apr: Activists and supporters of the Tibetan Women’s Association (TWA) will highlight the issue of the Chinese government-disappeared 11th Panchen Lama Gedhun Choekyi Nyima by carrying out for 14-days peace marches in five regions across India beginning 25 April, his 30th birthday.
China has steadfastly refused to answer questions on his whereabouts since kidnapping him and his family on 17 May, 1995. The programme to mark the 30th birth anniversary of 11th Panchen Lama began today and a special prayer was held at the Buddha Temple in Happy Valley, here. The guests were welcomed by offering them the traditional spiritual scarves.
The plan for the peace march was announced at a press conference held at Dharamsala on 18 April by the TWA President, Dolma Yangchen. India is in the middle of a general election and this has meant the march from Dehradun to Delhi is being curtailed with the participants taking a bus ride for a part of the distance. The march leaders will hold press conferences at Muzaffarnagar, Meerut, Ghaziabad and Delhi. President Dolma Yangchen said the march will seek to reach out to the people of India to raise awareness about and garner support on the issue of Tibet and the Panchen Lama.
Tibet’s exiled spiritual leader, the Dalai Lama, had formally announced his recognition of Gedhun Choekyi Nyima, then 6 years old, as the reincarnation of the 10th Panchen Lama, Tibet’s second most prominent religious figure, on 14 May, 1995. After kidnapping him on 17 May, 1995, China installed another boy, Gyaltsen Norbu, as the 11th Panchen Lama, which has not been accepted by the Tibetan community. She said that, internationally, Tibetans are submitting appeals, letters and reports to the respective United Nations’ offices. She said the peace march starting from five different regions of India was to inform people about the Panchen Lama’s situation. The Indian Government and Tibetan support groups have been asked to put pressure on the Chinese government to reveal unequivocally the whereabouts and condition of the 11th Panchen Lama.