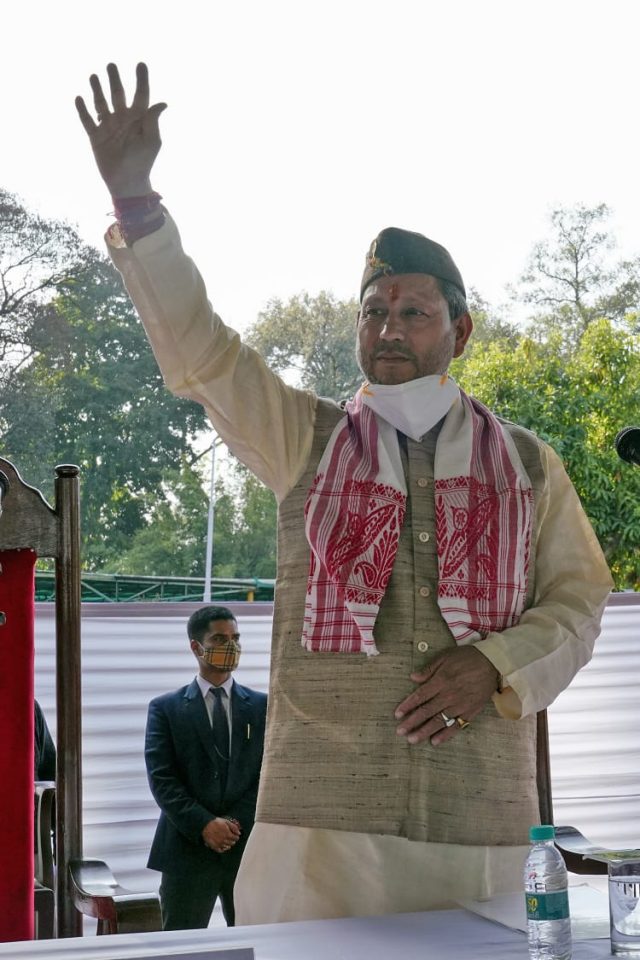 By Arun Pratap Singh
Dehradun, 10 Mar: As Garhwal Post had indicated yesterday, the BJP leadership sprang a major surprise, today, when dark horse Tirath Singh Rawat, apparently nowhere in the race for the top post, was declared the new leader of the BJP Legislative Party in Uttarakhand. At the meeting of the Legislative Party held at the BJP State Headquarters at 11 a.m. today, outgoing Chief Minister Trivendra Singh Rawat proposed the name of Tirath Singh Rawat, obviously as directed by the Party’s central leadership. 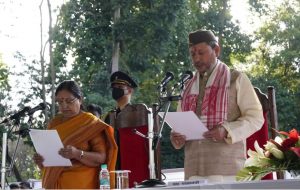 Tirath Singh Rawat then staked his claim before Governor Baby Rani Maurya at the Raj Bhawan, this afternoon. He was sworn in as the CM in a simple ceremony at around 4 p.m. He was sworn-in alone. The oath of office and secrecy was administered by Governor Baby Rani Maurya.
Sources confirm that deliberations are still underway regarding his Council of Ministers. Speaking informally with media persons, the political observer, Dr Raman Singh, indicated that it might take one or two days before the other ministers are also sworn in.
All the party MPs were also present during the meeting of the legislative party, and this was an indication by itself that one of the party MPs could be the High Command’s choice as new CM. The names doing the rounds before the meeting were that of Union Minister Ramesh Pokhriyal ‘Nishank’ and Nainital MP Ajay Bhatt. Highly placed sources in the BJP had already indicated that Dr Dhan Singh Rawat and Anil Baluni believed by many in the media to be leading the race were not in contention any more. Satpal Maharaj’s name was also in the news as a major contender but Tirath Singh Rawat, the dark horse in the race, proved to be the ultimate winner. The meeting was over in a matter of minutes.
After being elected as the new leader of the BJP’s Legislative Party, Rawat reminded that he started off as a small party worker and believes in staying rooted to the ground. He claimed that he had never dreamt of becoming the chief minister. Praising the “good work” done by Trivendra Singh Rawat, he added that he would carry on from where his predecessor had left. Thanking party leaders Narendra Modi, Amit Shah and JP Nadda, he said he would sincerely try to come up to the expectations of the party and the people. He added that he believes in taking everybody along.
Later, at 1.20 p.m., Rawat along with outgoing CM Trivendra Singh Rawat and some other party leaders reached Raj Bhawan and submitted a letter stating that he had been chosen as the new leader of the BJP Legislative Party and staked his claim to be the next Chief Minister. Later, Trivendra Singh Rawat visited Tirath Singh Rawat’s house, where he was given a warm welcome by Dr Rashmi Rawat, the new incumbent’s wife, a professor of Psychology. Rawat has been sworn as the tenth chief minister of the state in the 21 year old existence of Uttarakhand. With the exception of ND Tiwari, no other CM has been able to complete a full term of five years. Incidentally, Tirath Singh Rawat is the fifth chief minister from the Pauri district of Uttarakhand indicating the political significance of this particular district.

Tirath Singh Rawat has the image of being a straightforward and humble person. Having started off as a student leader with the Akhil Bharatiya Vidyarthi Parishad (ABVP), he went on to become the president of the HNB Garhwal University’s Students’ Union. He was active as an RSS leader from 1983 to 1988. He was elected as an MLC in undivided Uttar Pradesh in the year 1998 and appointed Uttarakhand’s first education minister in November 2000 after the formation of the separate state. After this, in 2007, he was elected as state general secretary of the Uttarakhand BJP. In the year 2011, he was elected BJP State President and remained on this post till 2013.
He was considered close to former Chief Minister BC Khanduri and had incidentally defeated Trivendra Singh Rawat in 2011 by a good margin in the fight for the party’s presidentship. Ironically, today, he replaced Trivendra Singh Rawat as the Chief Minister. After being denied the party ticket from Chaubattakhal, his constituency, he was pacified with an appointment as party’s national secretary and was the in-charge of the party affairs in Himachal Pradesh. In the 2019 Lok Sabha Elections, he was given the ticket to contest from Pauri Garhwal seat and won the elections against Manish Khanduri, the son of his political mentor BC Khanduri, by a huge margin of more than 3.5 lakh votes.