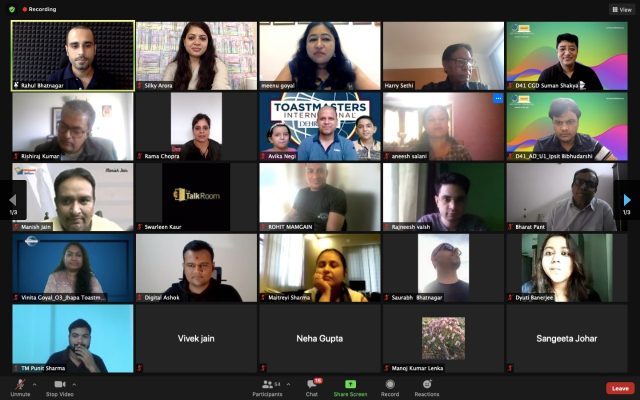 By OUR STAFF REPORTER
Dehradun, 1 Aug: The Toastmasters Club, Dehradun celebrated its 6th anniversary on Sunday by way of a virtual meeting which was attended by as many as 75+ participants. It was the 314th Meeting of this Club which came into existence on 2 August, 2015.
While this meeting was in the format of a typical club meeting and comprised prepared speeches, table topic speeches (impromptu short speeches) and evaluation, it was also different and more value added in terms of the participation by several expert speakers who shared their experiences as well as several luminaries of the Toastmasters Club, Dehradun, who have progressed to create successful enterprises of their own.
TM Silky Arora called the Meeting to order, followed by a welcome speech by Club President Harry Sethi. Toastmaster of the Day, TM Dr Meenu Goel anchored the proceedings and introduced the theme, ‘How to keep faith”. This was followed by a speech by Dr Gulshan Thakral on “Failure is a road to success”. There was also a speech by Suman Shakya of Nepal about his journey with Toastmasters.
The Table Topic segment was conducted by veteran Toastmaster Manish Jain. He urged many participants to give short speeches on topics which were most interesting. A special segment was dedicated to TM Rahul Bhatnagar, who is currently based in Goa. He reminisced about his journey with the Club. The evaluation session was handled by Toastmaster Bharat Pant. He described the efforts put in by VPO, Education, TM Matreyi, and TM Vikas Negi.
TM Matreyi announced the names of those who were ranked top three. The vote of thanks was by Toastmaster Harry Sethi and closing words by TMOD Dr Meenu Goel.

Garhwal Post has established itself as a credible, balanced and forward looking newspaper in India. Based in Uttarakhand, the daily is read by the aware, socially and culturally responsible, high-income elite of society.
Contact us: info@garhwalpost.in
meet sexy women https://garhwalpost.in/genuine-hookup-sites/ craigs list single women