The book contains the life led by an honest, God fearing, dedicated to his profession, Ayurveda, simple and reliable person who lived to project an example of humanity and gave equal love and respect to his family and nation throughout the time he spent in this world. He was a freedom fighter and active social worker. The man was known as Syed Rashid Ahmed, father of the luminary, Dr S Farooq, who authored his personal experience as a child and adult and is a replica of his late father; and loves helping one and all irrespective of their caste, creed or religion. His father was an example of idealism which he practiced throughout his life by example. The incidents narrated in the biography are so touching that one does not leave the book till one has read it to the last page. He wrote that book in Urdu first and later, on demand, it was translated into Devnagri script without hurting the spirit of the contents, which is rare in translated books. The author has mentioned even small events, which explain the morals and culture of the family that they are maintaining till today. A fact which is known only to a few is that Syed Rashid Ahmed Saheb was a poet at heart. The book was appreciated by Suraj Bhan, former Governor of Himachal Pradesh, who wrote, “A Tree Is Known By The Fruits It Bears”, Surjit Singh Barnala, first Governor of Uttarakhand, the former President of India, KR Narayanan, and former President APJ Abdul Kalam. I am sure the book will be liked by all those who believe in family values, culture and character, which is missing these days, after going through the book. Dr S Farooq is an MSc, Phd, DSc (Gold Medalist), Phyto-chemist, well known in the country and abroad. He has written several scientific papers and books which are available in libraries. He has written this book mainly for his growing family members and all those who would like to avail the benefits of his observations and experience, from his parents. 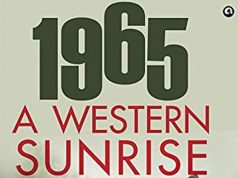 1965: A WESTERN SUNRISE is a Bestseller