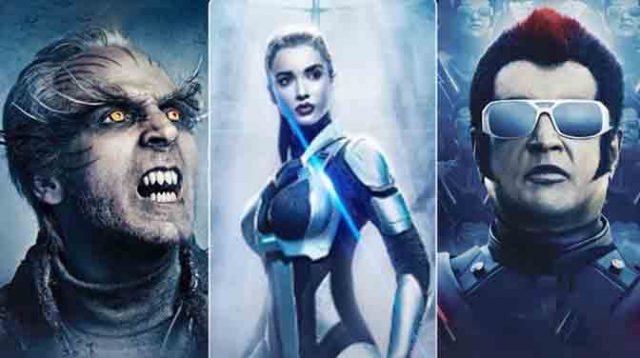 By Sunita Vijay
The movie ‘2.0’ is the most expensive and expansive directed by Shankar, a big screen experience worth going for. It’s a film that mentions the existence of a ‘fifth force’ in our lives. It has spectacular VFX effects, thought-provoking moments, two super stars, and some interesting humanoid robots. The movie provides many things in one box: sci-fiction, emotions, social message, environment-related concern, mild horror, hard hitting action, and above all, a superlative visual treat.
Dr Vasigaran (Rajinikant) is called by the government of Tamil Nadu to investigate the strange issue of missing mobile phones. The mobile phones are pulled in the air by some invisible force from hands, from inside the truck, from shelves, shops, cupboard, from everywhere. The suspense unfolds soon when a huge bird, made of mobile phones appears and starts attacking. The city is under threat and the residents are fearful. It avenges those who use mobile phones or are dealing in telecom including the telecom minister. To throw light on this weird event, a flashback appears. An old bird lover and ornithologist, Pakshirajan (Akshay Kumar), is worried at the pace birds are dying, their numbers dwindling due to the harmful effects of radiation from uncontrolled frequency transmitted by telecom towers. He justifies the fact that birds’ survival is important for human endurance. He protests against the mushrooming of telecom towers all over the city but soon succumbs to the undeterred negative influence of the powerful giants in this business. To overpower the giant bird, the need of the moment is to reassemble Chitti, the wonder robot dismantled in the previous movie. The story begins with an environment protection cause and a crusader’s efforts to save birds from radiation soon gives an interesting insight that a person’s aura is made up of micro photons that could be either negative or positive. This fight between the two opposite forces remains the core theme.
The plot and story remain sluggish and repetitive. The outcome is predictable and the screenplay weak. The director compensates well through rich visual chops, by creating few scenes that are highly creative and sets that are larger than life. A road created with mobile phones that wind up like a wave and engulf the human; a jungle converted into a sparkling bright canopy and tree trunks lit up with the screens of the mobile phones; mobiles conglomerating, attracting each other like magnets to form various shapes; a room and its walls, end to end, all covered with mobile phones and then it shrinks into a smaller room, squeezing the man sleeping on the bed; a mobile phone popping out of the stomach of a man; all are novice ideas and all these fantasies build up a great show, indirectly compelling us to think how mobile phones have invaded our lives and are slowly engulfing us within their jaws. The intention is admirable, action is spectacular but it lacks the finesse as required of a big budget film with equally bigger stars. The lack of humour makes the plot dull. The very few crispy lines are added by the humanoid robot, Nila (Amy Jackson). Nila does everything from assembling Chitti, making it an upgraded version of itself, protecting her boss, and efficiently doing all the chores that require technically higher artificial intelligence.
Rajinikant is a great crowd puller and the hall was charged with whistles and hoots whenever he was on screen as Chitti. He has many miracles to perform in the film as always. His unfading enthusiasm and charge is admirable.
Akshay Kumar’s role has many shades in the character. He is an old man, a bird lover, a campaigner, a mourner, and as Pakshiraj, he’s one bearing enormous super powers. All these have been performed with elan that can be expected from an experienced actor like him. The bird avatar he wore would take two to three hours of make-up with prosthetics, lenses, false teeth, feathery eyebrows and costume, but the final effect is worth the trouble.
Amy Jackson plays her part well and she is the only character in the film that brings in a soft gale of humour, although in rationed supply.
Shankar’s film portrays the battle between nature and technology, a Robot versus Pakshiraj without any songs, solely dependent on background scores supporting the actions, amidst expensive sets and sizzling visual effects. To see two megastars pitted against each other as protagonist and antagonist is an experience to relish, especially on the 3D screen. The film was shot using four lenses that are viable for the 3D format and the big screen 3D experience is worth the bucks spent on the ticket. 2.0 has many scenes to applaud. The top scorer is the crackling climax scene at the end when Pakshiraj (the giant bird) and Chitti collide. It has enduring appeal and robust grandeur required for a sci-fiction film. The other scene one when the bird appears in the city for the first time and Chitti confronts it has a big visual appeal. The mild hint of budding romance between Chitti and Nila is sweet (both the robots have inbuilt emotional faculty).
2.0 comes alive with 3D effects that enhance the fantastical effect. This magnum opus ‘2.0’ will impress when measured in terms of its imposing visual effects, ignoring the other weak areas that are in plenty and could have been easily improvised.
I go with three stars. 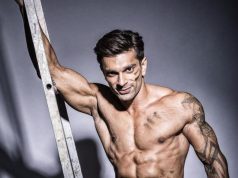 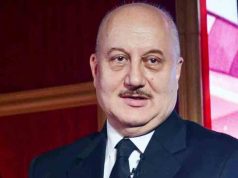 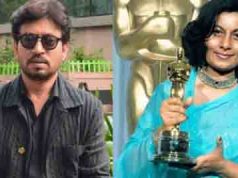