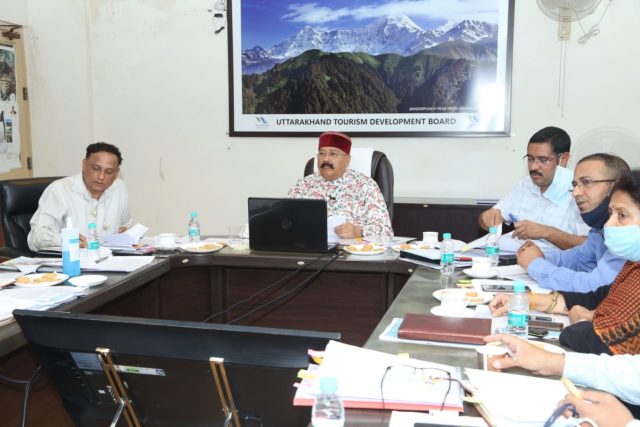 By OUR STAFF REPORTER
Dehradun, 13 Jul: Under the direction of State Tourism Minister Satpal Maharaj, a review meeting of the Tourism and Culture Department was held on Tuesday. He instructed the officials to fill up vacant posts in both the departments and open up the ‘Chamoli Ghas Track’.
During the review meeting, it was disclosed that a total of 126 posts are vacant, which include positions of Sports Officers, Field Assistants, Personal Assistants-II, Administrative Officers, Chief Assistants, Personal Assistants-II, Assistant Accountants, Junior Assistants, Cartographers, Chemists, Junior Technical Assistants, Junior Spokespersons and Musicians in the Culture Department. The minister instructed the officials to fill the positions as soon as possible.
He also disclosed that the Uttarakhand Government would now give double the grant amount to the pilgrims of the state going on the Kailash Mansarovar Yatra. A grant amount of Rs 25,000 per pilgrim was given by the government, so far, which would be increased to Rs 50,000.
Maharaj added that the Union Tourism Ministry approved Rs 34.78 crore for the development of infrastructure facilities on the route to Kedarnath under the Prasad scheme, which aims to promote religious tourism in the state. So far, an amount of Rs 27.83 crores has been released for the work. Along with this, administrative approval has been received for DPR of Rs 54.35 crore for the development works in Gangotri and Yamunotri Dhams under the Prasad scheme.
He added that 135 tourist sites have been developed under the circuit. Of these, 77 places have been developed in Garhwal Division and 58 in the Kumaon Division.
On this occasion, Tourism Secretary Dilip Jawalkar said that amidst the rapidly decreasing cases of Corona, work is being done expeditiously to bring Uttarakhand Tourism back on track. This would strengthen the economy and increase employment opportunities in the state.
Additional Secretary, Tourism, Yugal Kishore Pant, Additional Chief Executive Officer (Adventure Tourism) Col Ashwin Pundir, GMVN Managing Director Dr Ashish Chauhan, Director, Tourism, Prashant Kumar Arya, Director, Finance, Jagat Singh Chouhan, Culture Department Director Beena Bhatt, Additional Director Poonam Chand, Additional Director Vivek Chauhan, Additional Director Col Deepak Khanduri, Deputy Director Yogendra Kumar Gangwar, Research Officer SS Samant, District Tourism Officer Atul Bhandari and other officers of the department were present on the occasion.