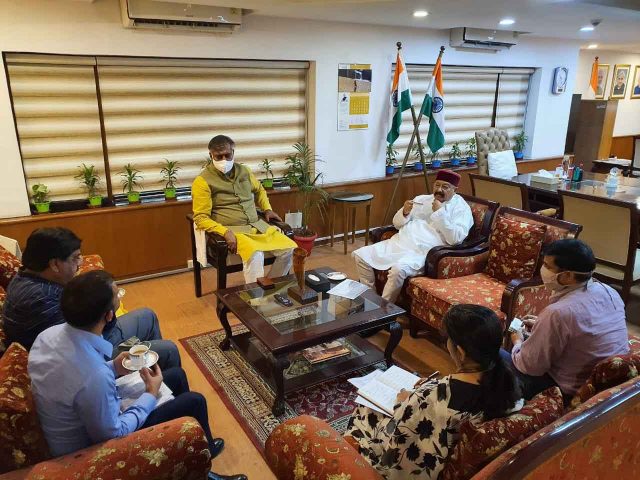 By Our Staff Reporter
Dehradun, 30 Jul: State Tourism and Culture Minister Satpal Maharaj met Union Tourism and Culture Minister Prahlad Patel in New Delhi, today. During the meeting, Satpal Maharaj informed the minister about the glory of Tibersen Mahadev located in Niti Valley. He mentioned that the temple is famous for the generation of a huge Shivling just like in Amarnath. The Tourism Minister said that, if the central government granted permission for the Tibersen Yatra, it would not just boost tourism, but also prevent the migration of locals from this last village of Uttarakhand. The Tourism Minister added that a certificate would also be provided to tourists who visit or stay at this border village, thereby encouraging tribal tourism.
Satpal Maharaj also requested the Union Minister to promote and publicise the local immunity boosting cuisines of Uttarakhand at the national level.
Satpal Maharaj added that, under the Tehri Swadesh Darshan Scheme, an amount of Rs 64.30 crores had already been provided against the stipulated amount of Rs 70.92 crores and 98 percent of the work was already completed. Also, Rs 67.62 crores against the stipulated Rs 76.32 crores had been released under the Kumaon Heritage Circuit Swadesh Scheme. The development work is already completed for this plan.
Under the Prasad Scheme, an amount of Rs 27.83 crores against Rs 34.78 crores had been provided for Kedarnath and about 89% of work was already completed for the same. Rs 11.77 crores against Rs 39.23 crores had been released for infrastructure based work in Badrinath, which is under process. A Rs 49.44 crores DPR for the development of tourism facilities in Gangotri and Yamunotri had been prepared and shared with the Indian Government. For Food and Craft Institute, Almora, the amount of Rs 375 lakhs against Rs 475 lakhs had been provided.
The Tourism Minister stated that the Indian Government had approved DPR worth Rs 16.20 crores for IHM Ramnagar, out of which Rs 9 crores has already been released. The centre was also in talks for the centralisation proposal for State Institute of Hotel Management. A work chart of Rs 97.70 crore lakh for Mahabharat Circuit under Swadesh Darshan scheme has been prepared and sent to the centre. The Union Minister had promised to consider it at the earliest.
Maharaj also met General VK Singh (Retd), Minister of State, Road Transport and Highways, today for a discussion on the early completion of the ‘All Weather Road’ for the Char dham Yatra. Gen Singh assured the Tourism Minister that he would visit Uttarakhand soon for inspection of the All Weather Road.