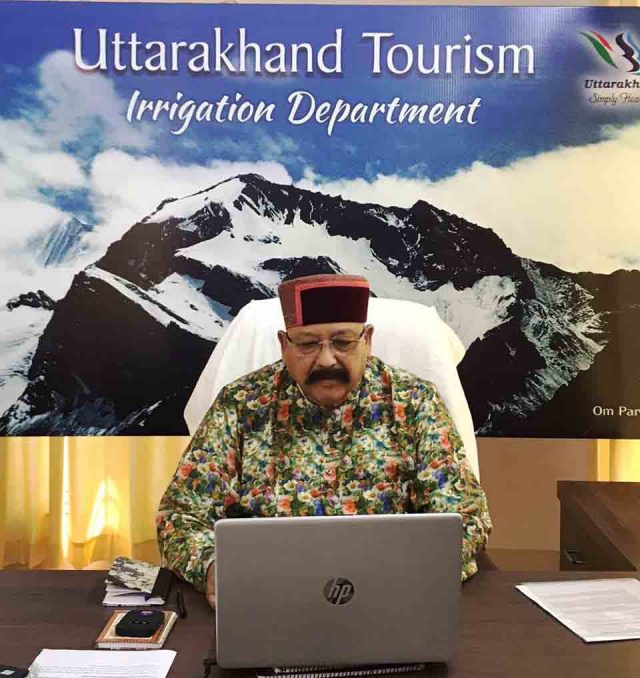 DEHRADUN, 27 Sep: A virtual round table discussion on ‘Tourism & Rural Development’ was organised by the Uttarakhand Tourism Development Board on the occasion of World Tourism Day. Chief Minister Trivendra Singh Rawat was the Chief Guest at the webinar. Tourism Minister Satpal Maharaj was the Special Guest of Honour and the Special Guest was Dilip Jawalkar, Secretary, Tourism, Uttarakhand.
Chief Minister Trivendra Singh Rawat said that tourism had slowed down due to Covid-19 but tourism activities would improve rapidly as the situation returns to normal. For this, theme-based tourist spots were being developed in every district in the state. He said that the upcoming winter season would encourage tourists to visit Uttarakhand.
The Chief Minister added, “Tourism in Uttarakhand is continuously increasing and the state is promoting religious and other tourism based activities. It is also one of the major sectors providing employment opportunities.”
“Uttarakhand is a state with great biodiversity. Snow covered mountain ranges, bugyals, exquisite flora and fauna and good human resources attract the attention of tourists towards Devbhoomi Uttarakhand. A Snow Leopard Park is being set up in Uttarkashi district. Continuous efforts are being made by the government to have tourism-based activities throughout the year. The state has a favourable environment for activities like kayaking, rafting, paragliding, etc. Efforts are being made to promote tourism in marginal areas. Homestays are being promoted and more than 2200 have been registered, thus far, including in districts like Almora, Pithoragarh and Pauri. Tourists have shown keen interest in homestays, which also provided good employment opportunities for the people.” The Chief Minister added that the best facilities had been developed for tourists.
Tourism Minister Satpal Maharaj declared, “The tourism sector has contributed significantly to Uttarakhand’s GDP. We are moving towards environmental conscious tourism, efforts are being made to improve the livelihood of local people through tourism and pilgrimage activities. Our focus is on turning disaster into opportunity. The theme of World Tourism Day this year is based on ‘Tourism and Rural Development’. Along with rural development, several efforts are being made by the state government to promote tourism in the mountainous regions. We are sure that in the coming days our overall efforts will again change the picture of Uttarakhand, tourism activities will improve people’s livelihood.”
He further said, “We have already completed the Bhagwati Circuit to create an environment conducive to promoting religious tourism in the state. Work on Shiva, Vaishnav Circuit, Navagraha Circuit, Nag Devta Circuit, Goel Devta, Ramayana and Mahabharata Circuits, Vivekananda, Shakya and Mahasu Devta Circuits is going on in full swing. After the completion of the new circuits, new avenues of religious tourism will open in the state. Additionally, the Indian Railways is all set to lay a railway line from Rishikesh to Karnprayag.”
Maharaj added that Uttarakhand had to be promoted as the most preferred state for health tourism, promoting traditional cuisines as an immunity booster. Uttarakhand is a repository of polyherbs and spices, which are known for their therapeutic use and have been used for centuries by sages and exponents of Ayurveda.
“We are considering developing the state for its ‘Himalayan immunity cuisine’ by combining the rich heritage of Kumaoni and Garhwali dishes,” he revealed.
Secretary, Tourism, Dilip Jawalkar said, “The tourism industry is an important pillar of Uttarakhand’s economy, which has the potential to lift the state from the influence of Covid 19. For the rural communities of Uttarakhand, tourism directly means opportunity. It provides economic empowerment for women and youth. Tourism encourages rural communities to protect and promote their traditional culture and heritage. These qualities provide a unique experience for the tourists”.
Panel speakers Prasoon Joshi, Manisha Pandey, Dr Shivam Maini, Dhanush Singh, Vipul Prakash, Mariellen Ward took part in the webinar.