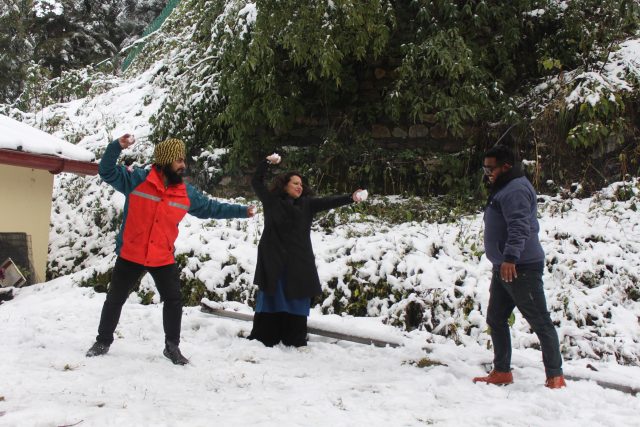 MUSSOORIE, 15 Dec: There was snowfall in the Lal Tibba area which resulted in a heavy fall in temperature. Tourists in the Lal Tibba and Dhanaulti areas enjoyed the snowfall. Due to the huge number of tourists, the hoteliers and the local people were pleased as their business increased. Seeing the huge crowd moving towards Lal Tibba, Mussoorie Police diverted traffic to Mussoorie Tehri bypass for some time to ease the traffic. Due to the large number of tourists, many times a long line of vehicles could be seen from Landour towards Gurudwara Chowk and Mullingar Chowk. Tourist Sandeep Saini, who had come from Delhi, said he here with his family as soon as the snowfall was reported. But as there was no snow in Mussoorie, they moved on to Lal Tibba and Dhanaulti. Harminder Singh, who came from Punjab, said that after enjoying the Dhanaulti snowfall, he went on to Lal Tibba. On his way back from Dhanaulti to Mussoorie, he had to face traffic jams at many places. He urged the local administration and police to make smooth arrangements in view of the large number of tourists. Local residents Mukesh Kharola and Ashish Kanaujia said that due to snowfall around Mussoorie, a large number of tourists had which had led to increase in business. They said that, hopefully, there would be snowfall in Mussoorie on the occasion of Christmas and New Year. President of the Mussoorie Trade Association Rajat Aggarwal said that, from 25 to 30 December, the Mussoorie Winter Line Carnival is to be organised for which special preparations were being made. All the traders are decorating their establishments to please the tourists. Special preparations had been made by the police for the New Year, so that tourists coming to Mussoorie wouldn’t face any problems. Mussoorie Police In-charge Vidya Bhushan Singh Negi said that a special plan had been prepared by the police in view of the snowfall and additional police force was also deputed on the main squares of the town. He said that traffic returning from Lal Tibba was diverted to the Tehri Bypass. A special plan has been prepared for Christmas, the Carnival and New Year celebrations. He was hopeful that tourists from the country and abroad and local people would not face any kind of problems.