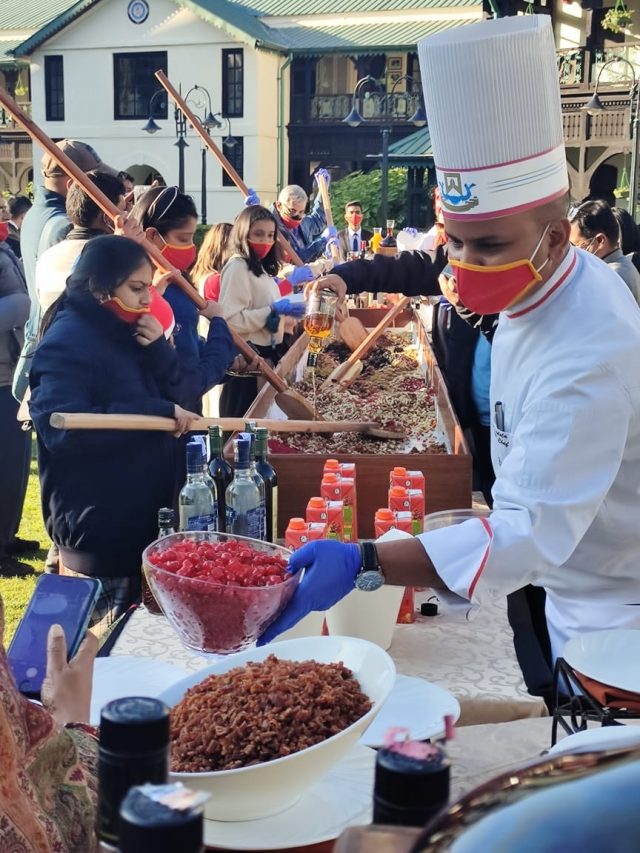 Mussoorie, 28 Oct: While the rest of the country begins to ring in Diwali festivities, exactly a week away, the Welcomhotel By ITC Hotels, The Savoy, here, is bringing in the spirit of Christmas, that, too, two months early.
In its sprawling Central Lawn, keeping in tune with the Christmas theme of Red and Gold, on a sunny autumn afternoon, the hotel held its customary cake-mixing ceremony, followed by a traditional English high-tea. 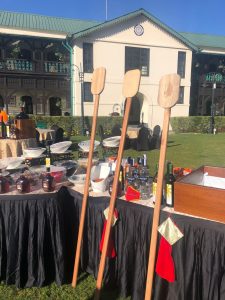 Year after year, following the age-old custom, the hotel staff, guests, along with dignitaries from the community, turn out in large numbers towards the end of October to do their bit in keeping this 17th century tradition alive. They gather around a customised eighteen foot cake-mixing table to kick-off the festivities with fun and laughter.
During the half hour ceremony, Head Chef Rajeev Badola explained, “Cake-mixing preparations begin months in advance. The customary mixing of an array of fruits, black currant, apricot, ginger peels, prunes, figs, resins, dates, tutti-frutti, grounded spices, mace, soaked in choicest of spirits such as wine, dark and white rum and brandy, give that well-blended flavour to the Christmas cake and, of course, it brings the community together and enhances the festive mood.”
Due to Covid, last year’s cake-mixing was an intimate affair. What makes this year’s cake-mixing even more special, keeping Covid protocol in place, is the five and a half feet long locally procured hand-made spatulas that will ensure the highest standards of hygiene, safety and physical distancing, along with customised face masks stitched in-sync with the occasion.
After being soaked for weeks on end, this perfect blended fruity mixture will then be baked into traditional festive indulgences in the month of December, setting the tone for the onset of Christmas in the hill-station of Mussoorie.
Gautam Valli, General Manager of The Savoy, tells us, “This isn’t all! This is just the beginning. We have a whole lot of events lined-up until the end of the year.”
Watch this space for more.

Garhwal Post has established itself as a credible, balanced and forward looking newspaper in India. Based in Uttarakhand, the daily is read by the aware, socially and culturally responsible, high-income elite of society.
Contact us: info@garhwalpost.in
https://garhwalpost.in/most-romantic-getaways-near-me/