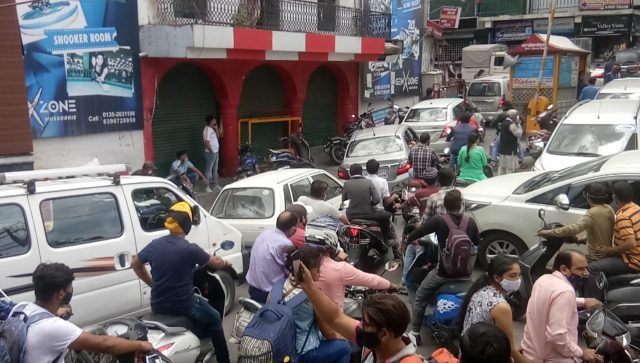 By Our Staff Reporter
Mussoorie, 4 Jul: During the tourist season, the local citizens, including tourists, are facing a lot of trouble due to the breakdown in the traffic system. There is no such road in Mussoorie city where there is no jam, whether it is the Mussoorie-Dehradun road or the Mall Road or any other connecting road.
Tourists coming to Mussoorie are particularly hassled due to traffic jams. Harvinder Singh from Haryana said that no arrangement had been made by the administration in Mussoorie to deal with the traffic. Local people questioned the functioning of the administration and police. Local Rajeev Aggarwal said that every year during the Mussoorie tourist season, big meetings are organised to deal with the traffic and many plans are made but nothing is visible on the ground. He said that, if this situation continues, then the day is not far when tourists will stop coming to Mussoorie.
He said that Mussoorie is witnessing a huge influx of tourists after the relaxation of Corona curfew, but no action plan has been prepared by the police and administration, due to which there are continuous traffic jams in Mussoorie. At both the barriers of Mall Road and Kolhukhet, a lot of time is being taken in collecting the entry fee charged from the vehicles, due to which the vehicles are getting jammed for a long time.
Former Mussoorie Municipal President and BJP leader OP Uniyal said that many schemes are being worked out by the government to deal with the traffic jam in Mussoorie, under which many parking spaces are to be constructed. He said that all efforts are being made to deal with the problem by the local administration and police in Mussoorie, but due to the arrival of tourists in large numbers, the arrangements have come to a standstill.