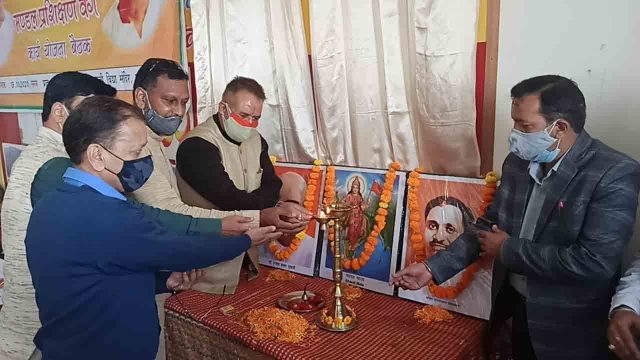 By Our Staff Reporter
Mussoorie, 13 Oct: A mandal level training class for Mussoorie BJP activists was held at the Mahatma Yogeshwar Saraswati Shishu Mandir.
The training class was inaugurated by BJP leaders Veer Raghav, Sanjay Vyas and Mussoorie MLA Ganesh Joshi by lighting the ceremonial lamp, jointly. They said that training leads to the development of values and ideas in the workers. The worker is not devoted to any person but to the ideology of the party. They called upon the activists to increase their activism on social media. Through social media such as Facebook, WhatsApp, Instagram, they could publicise the achievements of the central and state governments among the public.
In the training class, the workers were informed in detail about the party’s policy, current conditions and positive changes brought about by the decisions of the government at the national level. MLA Ganesh Joshi said that the Trivendra Rawat Government of the state had set many records in the country by launching public welfare schemes. He called upon the workers to inform people about the development works done during the tenure of the Central and State Governments.
Among those present were Mussoorie BJP President Mohan Petwal, Dehradun District Panchayat Vice President Deepak Pundir, Cantonment Vice President Badal Prakash, Kushal Rana, Madan Mohan Sharma, Rakesh Agarwal, former Municipal Chairman OP Uniyal, Anil Singh, Sapna Sharma, Kunal and others.