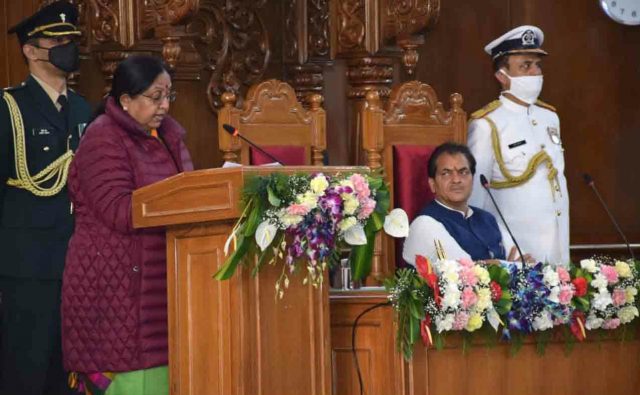 By Our Staff Reporter
Dehradun, 1 Mar: The budget session of the Uttarakhand Assembly began today with Governor Baby Rani Maurya’s address in the summer capital of Gairsain. While the Governor highlighted the ‘achievements’ of the Trivendra Singh Rawat Government, the Opposition members led by Leader of the Opposition Dr Indira Hridayesh walked out of the House soon after the address began. They alleged that the Governor’s address offered no solutions to persistent problems in the state like unemployment.
Beginning her address, Maurya claimed that the government aimed to bring Uttarakhand into the category of developed states by implementing the concept of decentralised development and “Sabka Saath Sabka Vikas”. The problems and the challenges faced by the state would be tackled with the cooperation of all. She outlined the government’s achievements in various fields, including health, drinking water, employment, MNREGA, malnutrition, migration, farming, cooperatives, etc., and also announced future plans.
Maurya said that a placement cell had been set up at the district level for employment generation. Special efforts were being made for campus interviews of students. Employment had been provided to 40 percent of the students. In addition, short-term employment training programmes were also being conducted. Efforts were being made in earnest to transform the agriculture sector and to move towards sustainable farming practices. She added that Paramparagat Krishi Vikas Yojana (PKVY) was being operated to cover total acreage of 78,000 hectare for organic farming. Some green agriculture projects would soon begin, starting from Pauri district with United Nations Food and Agriculture Organisation funding.
The Governor said that sprinkler irrigation systems were being promoted for irrigation of un-irrigated agricultural land in hill districts. Proposals for 422 cluster schemes had been sent to the Union Government under the Prime Minister Agricultural Irrigation Scheme in order to bring even more areas under irrigation. She said that Uttarakhand had been declared an herbal state in view of the abundant reserves of herbs in the state and Ayurveda assuming greater role in the health sector. Referring to health services, she claimed that the government was committed to providing better medical care to the general public. She also mentioned steps like upgradation of hospitals, deployment of more doctors and paramedical staff, implementation of the Atal Ayushman Yojana, Telemedicine e-Sanjeevani and also “effective” management of Covid-19 pandemic in the state by setting up Covid Care Centres and approval of three new three medical colleges.
Maurya also highlighted the steps taken by the government on e-governance in the state and said that the process of fully paperless government work was underway. She said that the state’s gross domestic product was Rs 2.536 lakh crores and the economic growth rate was 4.2 percent at the constant prices (2011-12). The estimated per capita income for the state was Rs 2.02 lakhs per annum. She claimed that governance in the state had improved considerably due to focus on transparency in the government machinery, participation and accountability. She added that several other steps had been taken to address the grievances and problems of the common person and one of the steps was setting up of the Chief Minister’s Helpline. He said that in disaster-sensitive Uttarakhand, State Disaster Management Authority and District Disaster Management Authorities had been strengthened and emergency operations centres had been set up. The government had focussed greatly on planning, development and management of water resources in order to ensure conservation of water resources.
The Governor said that the ‘One Nation One Ration Card Scheme’ had been implemented in the state. More than five lakh families had been given employment under MNREGA. An amount of Rs 46.18 crores had been sanctioned for the groups formed under the National Rural Livelihood Mission. An amount of Rs 574 crores had been recommended for three-tier panchayats, against which an amount of Rs 287 crores had already been transferred to the accounts of the panchayats. She added that the government also was making efforts to improve sports infrastructure in the state and to promote traditional sports.
In the afternoon, Speaker of the House Premchand Aggarwal read out the Governor’s address so that it could formally become the part of the House records. After approving the recommendations of the Business Advisory Committee, he adjourned the House till 11 a.m. on Tuesday.