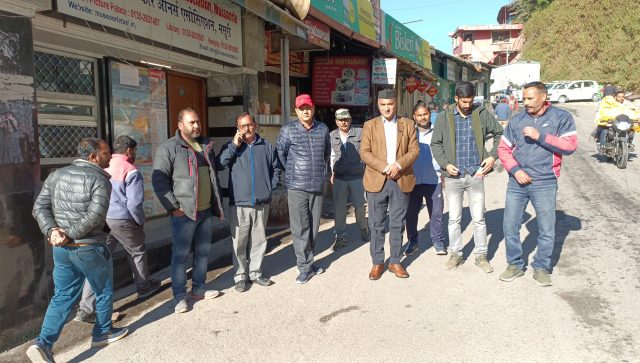 Mussoorie, 29 Nov: ‘Chakka Jams’ were held across the state to protest against the new fitness test regime for public transport in Uttarakhand. The impact of this protest was also seen in Mussoorie. All taxis and jeeps did not operate in Mussoorie due to which commuters were greatly inconvenienced.

Taxi and jeep operators protested against the government by locking the office of the Taxi and Jeep Association. State President of the Uttarakhand Taxi Maxi Federation Sundar Singh Panwar said that the association is opposing the computerised fitness test being sought to be implemented in the state. He announced that, along with other association officials, he would meet the Transport Minister, Secretary and Commissioner to get the decision withdrawn.

He also alleged that there were improprieties in awarding the designated contract to the company for the fitness test. He declared that, in the next elections, the BJP government would be taught a lesson through the loss of votes. He declared that the Legislative Assembly would be gheraoed by the Transporters Association and if their demands are not met then they would be forced to go on an indefinite strike.

Panwar said that all the unions of Uttarakhand, along with bus, city bus, truck, taxi, maxi (jeep) auto, Vikram, will be on strike in the state. He said that, considering the geographical conditions in Uttarakhand, it is not possible to go for computer fitness tests. He wanted the old system to continue.