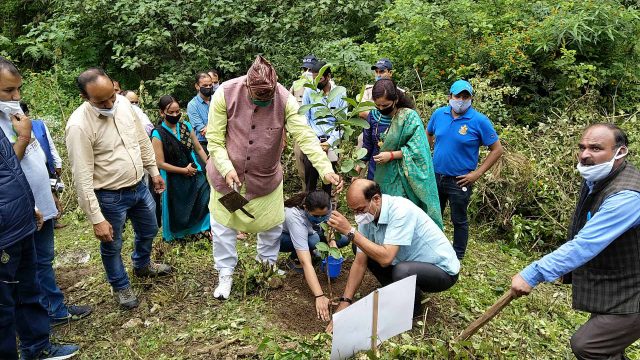 By OUR STAFF REPORTER
MUSSOORIE, 15 Jul: A programme was organised in Kyarkuli Bhatta Village here, today, under the auspices of Pandit Deen Dayal Upadhyay Action and Research Society and Grow Tree during which hundreds of plants of different species were planted. The Chief Guest at the programme was Agriculture Minister Subodh Uniyal. Mussoorie MLA Ganesh Joshi also attended the event and planted a variety of saplings.
On this occasion, Kyarkuli village head Kaushalya Rawat and Chamasari village head Narendra Melwan submitted a memorandum to the Agriculture Minister regarding the problems of the village.
Agriculture Minister Subodh Uniyal, while speaking to media persons, said that with the slogan of ‘save the trees, plant trees’, were planting trees all over Uttarakhand, which was good for the hills. He said that the mountains had been emptied and the water sources had dried up.
Subodh Uniyal said that the corona epidemic has disturbed the lives of the people. He said that the Ministry of Agriculture is working to give subsidy to the farmers under schemes to strengthen the farmers. He said that Uttarakhand is the first state in the country which has done the work of abolishing Mandi duty. The Uttarakhand Agriculture Ministry has amended several rules to strengthen the farmers financially.
Mussoorie MLA Ganesh Joshi said that in order to preserve the environment, the state government was going to plant two crore trees on 16 July during the Harela festival in collaboration with the public. Present on the occasion were DPO Minakshi Joshi, BJP Mussoorie President Mohan Petwal, Kushal Rana, Neha Joshi, Anand Rawat, Karan Kotal, Dipasu, Gajendra Rawat, Pramod Thapli, Sagar, Anil Singh, Sumit Bhandari, Sapna Sharma, Abhilash Rana and many others.