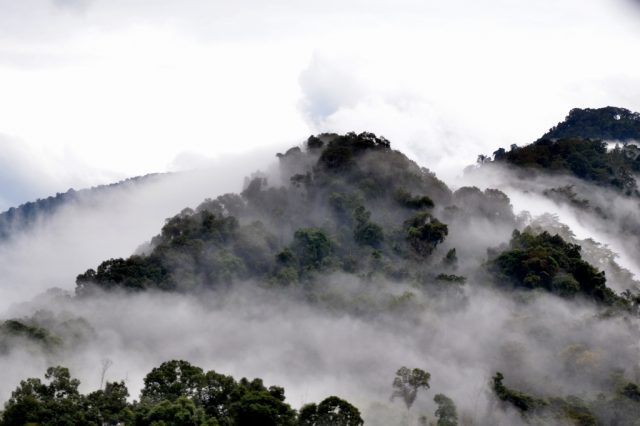 ‘Why is Mussoorie the ghost-capital of the country?’ That
question has oft been flung at me. Struggling for an answer, I say its us writer types who live here – they turn perfectly normal people into ghosts. And believe-you-me this no cop out. We all grew up on tales of a female apparition, who flitted about the Officer’s Mess near Cheh Tanki.
Later I tracked down a retired barman, who told me: ‘My father used to talk of an early Commandant, who’d asked a young musician to teach his daughter the piano.’
The story has it that the fellow ended up teaching her a little more.  Afterwards, in shame, she was packed off to old Blighty, while our pianist vanished without a trace. Except that years later, the midnight music lessons carried on. You can still hear the piano tinkle as her dainty fingers danced on the ivory and ebony.
But pardon the digression. There was no orchestra was in attendance on March 2015, when an accomplished Tamil writer announced his ‘death’ on social media. Having had enough, he grimly announces his anger with ‘a song of curses at all of you.’ He was vilified by accusations of insulting the sentiments of the residents of Tiruchengode. The threat to his life came from fringe elements baying for his blood, demanding an immediate ban on the book.
Murugan’s novel Madhorubhagan, published in English as One Part Woman, is set in the countryside around the simple lives of Ponna and Kali, who after twelve long years of being together are unable to have a child. ‘So many people had conspired to fool one man. His mother, mother-in-law, father-in-law, brother-in-law, Poona.’ For it is customary for women to go out to a festival where she meets a young stranger, who looks so much like Kali, who proceeds to hold her hands and gently drapes them around himself. ‘The moon was spreading its sweetness all over the world. There was not a spot of cloud in the sky. The moon had no obstacle in reaching across the vast heavens. The earth, drunk on the nectar of moonbeams, lay in stupor. An intoxicated expanse.’
Meanwhile, Kali’s world has imploded leaving him indignant, fuming and stunned. How could this woman, who he believed was a part of his body and a part of his soul go out, just like that, and return home smelling of the scent of another. He decides to put an end to his suffering and try he does. But fate intervenes. The moment passes.
Kali is determined to punish Ponna for what he sees as an absolute betrayal. On the other hand, Ponna too is equally upset at being forced to atone for something that was not her fault. In the wake of the temple festival, the two of them grapple with the harsh reality of changed circumstances. His solution? He gives vent to his frustration by hitting the oxen, or chasing the sheep or throwing stones at the dog.
Given her predicament, dark thoughts of ending her life come visiting: should she down the shutters by calling it a day? Or drown herself and the baby in the waters of the gentle Kaveri river? It would be the kindest way to end things, at least for the baby. The child should not be left behind lest he be forced to grow up alone only to be later one day reviled as one born out of wedlock.
Only an accomplished writer like Perumal Murugan can give a twist to an all consuming scene. With deftness the grand master takes the narrative to a whole other level with a dramatic conclusion. In a single sentence, there’s a twist to the tale that shall leave you breathless, gasping and craving for more.
My only grouse, if you will let me call it that, is the book us slim. Perhaps there is some truth – that good things often come in small packages. For this much I have learnt: star dust falls only when you refuse to give up, even while every atom of your being tells that its all over.