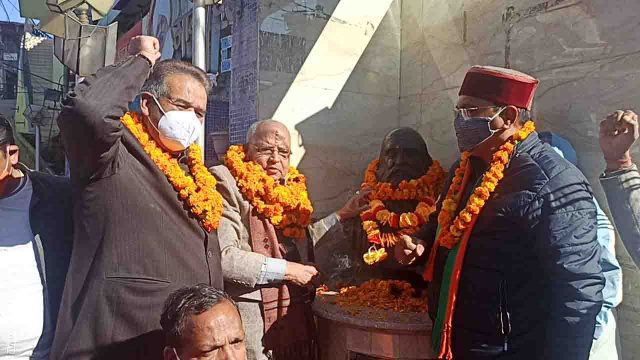 By Our Staff Reporter
Mussoorie, 24 Dec: The 97th birth anniversary of Indramani Badoni was celebrated with great pomp here, today, at Badoni Chowk.
On this occasion, BJP State President Bansidhar Bhagat, Mussoorie MLA Ganesh Joshi, Mussoorie Palika Chairman Anuj Gupta, Dehradun Mayor Sunil Uniyal Gama garlanded the statue of Indramani Badoni at the chowk. They recalled the role of Badoni in the statehood movement. Chairman Anuj Gupta promised that, soon, a life-sized statue of Badoni would be installed at the site.
On this occasion, General Secretary of the Indramani Badoni Vichar Manch, Pradeep Bhandari said that the government had started forgetting Badoni’s vision. The dreams of Badoni had to be realised on the ground. He said that he would make a film in the near future to introduce the new generation to the personality of Badoni. Puran Juyal, President of the Manch, said that Bodoni’s statue should be installed in the Uttarakhand Assembly, Secretariat, Chief Minister’s residence and all government offices. It was stated that this son of Uttarakhand fought a decisive battle for state formation in 1994 at the age of 72. The movement in protest against the Forest Act at Tawaghat in 1988 was also recalled.
Also present were Mussoorie Trade Association president Rajat Aggarwal, litterateur Jai Prakash Uttarakhandi, Rajesh Sharma, filmmakers Rajendra Rawat, Kamlesh Bhandari, Dharampal Panwar, Kapil Malik among others.