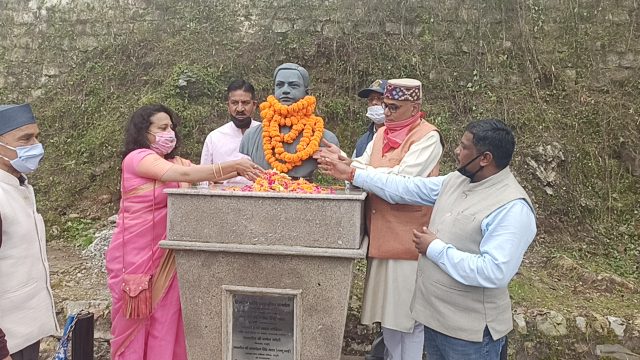 By OUR STAFF REPORTER
Mussoorie, 14 Sep: Tribute was paid to Chandra Kunwar Bartwal, today, on his 74th death anniversary, today, by offering floral tribute and by garlanding the statue of this legendary philanthropist and renowned poet from Garhwal, which is installed on the Mall Road, here.
Chandra Kunwar Bartwal Research Institute, Mussoorie, President Shoorvir Singh Bhandari said that due to the corona epidemic, only a small programme was organised to mark the death anniversary. He said that that, at the young age of 28, Chandra Kunwar Bartwal composed many poems of grand stature. Through his work, he fought for the rights of the downtrodden and dalits. He was a nature lover and that showed in his composition, “Itne Phul Khile”. Bartwal was a man who loved nature and humanism.
Speakers on the occasion recalled that a person who loved nature was automatically a lover of the human race. They further said that the poems of Bartwal had been incorporated in the primary school syllabus so that the students could know and learn them. They further said that the state government would construct a museum on Bartwal so that his poems and stories could be preserved.
Upendra Lekhwar said that no other poet had caught the spirit of the panorama, cloudscape and the grandeur of the rivers and the mountains like he did. His most famous work was on the River Rispana, where the present State Assembly is located. It goes: “Hey saal meikhle kis giri se tum itna roop liye nikhrey, Nayano mein addha sudhabhare. Rishi Parna (now Rispana) ki dupheri…”
Chandra Kunwar Bartwal was born on 20 August, 1919 in village Malkoti, Talla Nagpur, District, Chamoli. His other noteworthy works are Anandi, Kunwari, Nandini, Geet Madhvi and many more. He suffered from tuberculosis and died at the young age of 28 on 14 September, 1947.
Municipal Chairman Anuj Gupta, Jasbir Kaur, Mussoorie BJP President Mohan Petwal, Kushal Rana, Sapna Sharma, Abhilash, ex-Municipal Chairman OP Uniyal, Upendra Lekhwar, Anil Godiyal, Megh Singh Kandari, Prakash Mahlotra, Pradeep Bhandari, Pushpa Padiyar, Narendra Padiyar and many others were present at today’s event.