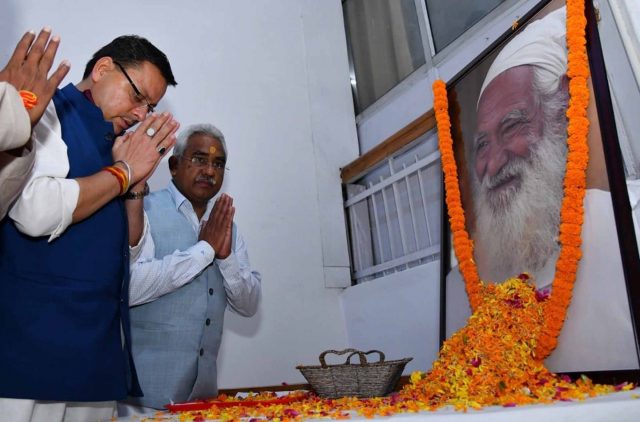 By Our Staff Reporter
Dehradun 23 Aug: On the first day of the monsoon session of the State Legislative Assembly, Padma Vibhushan awardee, environmentalist and Chipko movement leader Sunderlal Bahuguna was paid rich tribute by the members in the gallery of the House.
His portrait was today placed in the gallery where, while entering the House, all the ministers and MLAs including the Speaker and the Chief Minister offered flowers before his portrait and paid their tributes to the late Sunderlal Bahuguna.
Earlier, the Speaker of the Vidhan Sabha, Premchand Aggarwal felicitated Bahuguna’s son, Rajiv Nayan Bahuguna, and daughter Madhu Pathak, in his office by offering shawls and Gangajal to them.
Present on this occasion were Chief Minister Pushkar Singh Dhami, Cabinet Minister Dhan Singh Rawat, Cabinet Minister Bansidhar Bhagat, Cabinet Minister Arvind Pandey, BJP State President Madan Kaushik, MLA Deshraj Karnwal, MLA Sanjay Gupta, MLA Rajkumar Thukral and other leaders.
Aggarwal said on the occasion that Sunderlal Bahuguna had led many movements for the cause of the environment, which showed his lifelong love for trees, environmental protection and his commitment towards the protection of Himalayas and rivers. The Speaker said that Bahuguna was a freedom fighter and he would always be a source of inspiration for society for a long time to come. Aggarwal added that, while Bahuguna had left his mortal body but the work done by him for environmental conservation was immortal, and it would keep him alive in the heart of every person.
Rajeev Nayan Bahuguna said that Aggarwal had been always associated with his family and was always there to support the family. He expressed his gratitude towards the Speaker on this occasion.