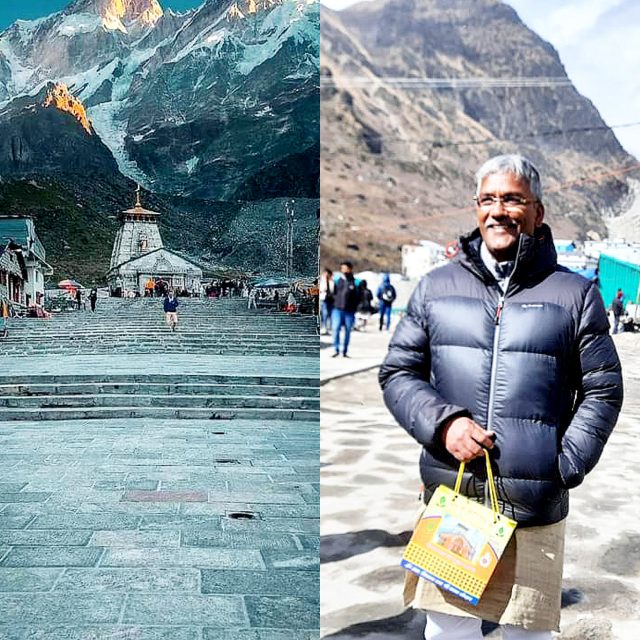 By Arun Pratap Singh
Dehradun, 1 Nov: The constitution of the Devasthanam Board to wrest control of Char Dham shrines, and to manage their affairs along with those of allied shrines was bound to create a headache for the state government. However, the issue has been taken rather lightly by the BJP Government in Uttarakhand. In this light, today’s incident ought to raise alarm within the government as well as the ruling party, with former Chief Minister Trivendra Singh Rawat – under whose tenure the Devasthanam Board was set up – not being allowed by the Teerth Purohits to enter the Kedarnath temple and offer prayers.
Sources claim that intelligence sources (LIU) had already indicated to Trivendra Singh Rawat that his visit could be opposed by the Teerth Purohits and he better avoid travelling to Kedarnath, at present. However, Rawat did not heed the warning, taking it he warning rather lightly. He reached Kedarnath and, in the morning, when he tried to enter the shrine, slogans were raised against him by the Teerth Purohits and he was not allowed to enter. Not only this, police personnel posted there chose to remain silent spectators. There was no physical skirmish between the Teerth Purohits as well as other stake holders and those accompanying Rawat, but he could not obtain Darshan and had to return from Kedarnath.
This issue was the hot topic of the day being discussed in political circles, especially in the BJP, today. Sources claim that the representatives of the Panda Samaj of Kedarnath even used very derogatory words for Trivendra Singh Rawat, but he maintained dignified silence. The police personnel also remained mute spectators to the whole incident.
It is claimed that the Police chose to remain silent in view of the upcoming visit of Prime Minister Narendra Modi to Kedarnath on 5 November. The Police and the local administration did not want the issue to escalate any further.
Clearly, not only former CM Trivendra Singh Rawat but also his successors, Tirath Singh Rawat and, now, Pushkar Singh Dhami have not understood the gravity of the issue. This issue has the potential to influence results in around 7 to 8 constituencies during the upcoming elections, claim BJP insiders. The Dhami Government has set up a high level committee headed by veteran party leader and former MP Manohar Kant Dhyani, who also belongs to the Panda Samaj. But the delay in a coming to suitable decision on the Devasthanam Board may prove costly for the BJP feel political pundits in the state.
Meanwhile, reacting to the day’s incident, Chief Minister Pushkar Singh Dhami reminded that he had set up a committee to make due recommendations and that the government was awaiting its final report. He added that the matter would be resolved after the final report of the Committee was submitted. It may be recalled that, last week, the Dhyani Committee had submitted its interim report on the Devasthanam Board. The contents of the interim report have not been made public so far.
The Teerth Purohits have been agitating against the Devasthanam Board ever since its constitution when Trivendra Singh Rawat was the Chief Minister. The stakeholders of all the four main shrines and the allied shrines, which are part of the Devasthanam Board, have demanded its dissolution.
BJP MP Subramanian Swamy had first filed a case challenging the formation of the Board with the Uttarakhand High Court. After having lost the case there, he has challenged the High Court’s decision in the Supreme Court. It remains to be seen whether the Teerth Purohits and other stake holders will try to create a problem during the upcoming Kedarnath visit of Prime Minister Narendra Modi. As of now, indications available are not very good as the Panda Samaj of the Char Dham Shrines has announced a ban on visits of BJP leaders to the shrines.