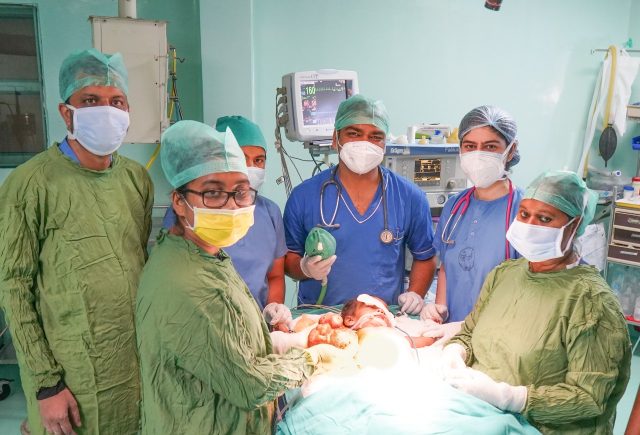 By Our Staff Reporter
Dehradun, 14 Jun: The doctors of Shri Mahant Indiresh Hospital have removed a tumour weighing 800 grams from the stomach of an eight month old baby girl. The tumour weighed as much as 15% of the total body weight. In general such heavy tumours are not present in such small children. The operation was conducted under the Ayushman Scheme.
The mother of the child, a resident of Vikas Nagar, felt a big tumour inside the stomach of her baby girl two months ago. The stomach was bloating in an unnatural manner. She reached Shri Mahant Indiresh Hospital and consulted Senior Pediatric Surgeon Dr Madhukar Maletha. The CT scan of the baby girl revealed that the tumour had spread. Dr Maletha advised surgery. In the complicated operation that lasted 2 hours, the 800 gram tumour was removed from the patient’s body. The disease is called Retroparitonial Teratoma.
The Medical Superintendent of Shri Mahant Indiresh Hospital, Dr Anil Kumar Dhawan, said that every month, a large number of patients benefit at the hospital under the Ayushman Scheme. Every possible treatment of the poor and needy is done as per the guidelines of Ayushman Scheme at the hospital. Significant roles were also played in the tumour extraction by Dr Saurabh of the Anaesthesia Department, Dr Surabhi, Sister Ratna, Sister Shreeti, Sister Janki, etc.