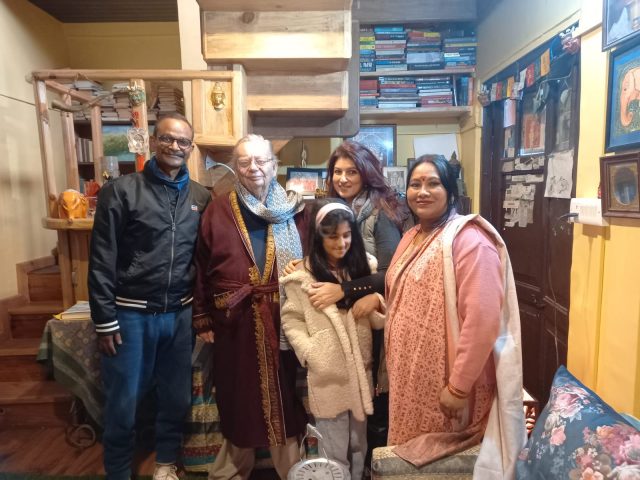 Mussoorie, 16 Feb: Film actor, author and columnist Twinkle Khanna, wife of superstar Akshay Kumar, met Padma Bhushan awardee Ruskin Bond, here, today.
Ruskin Bond presented Twinkle Khanna a book and talked to her about Mussoorie.
Akshay Kumar is in Mussoorie these days for the shoot of his film ‘Ratsasan’. Twinkle Khanna arrived in Mussoorie with her daughter and the mother-daughter duo visited Char Dukan and Lal Tibba to enjoy the natural beauty of Mussoorie and the mesmerizing Himalayan range.
Twinkle Khanna also visited the residence of famous writer Ruskin Bond located in the Cantonment area. She interacted with Ruskin Bond and also posed for photographs with him and his family.
Ruskin Bond’s son Rakesh Bond and his wife also conversed with Twinkle Khanna. On this occasion, Bond presented Twinkle Khanna a book.
Rakesh Bond revealed that Khanna was very happy to meet Bond. They kept their distance from the media, however.
Akshay Kumar is staying with his family at the five star JW Marriott, near Mussoorie. Akshay will be seen in the inspired Hindi version of South Indian film ‘Ratsasan’, being directed by Ranjit Tiwari. Its shooting is underway here. Actress Rakul Preet is the main lead in the film. Chandrachur Singh is also playing a pivotal role in the movie. Akshay Kumar, as already reported, is very impressed by the beauty of the hill town.
While working in the film, Akshay has been seen trying to make the most of the Mussoorie ethos. The film is a psychological crime thriller.
In the last two years, many films, web series and TV serials have been shot in Mussoorie owing to its many wonderful location and weather advantages. Many stars have shot films in recent months.
The movie ‘Ratsasan’ is being produced by renowned filmmaker Vashu Bhagnani. Bhagnani is shooting in Uttarakhand after almost 22 years.

Garhwal Post has established itself as a credible, balanced and forward looking newspaper in India. Based in Uttarakhand, the daily is read by the aware, socially and culturally responsible, high-income elite of society.
Contact us: info@garhwalpost.in
dating apps you can go live on naked hot muscle men