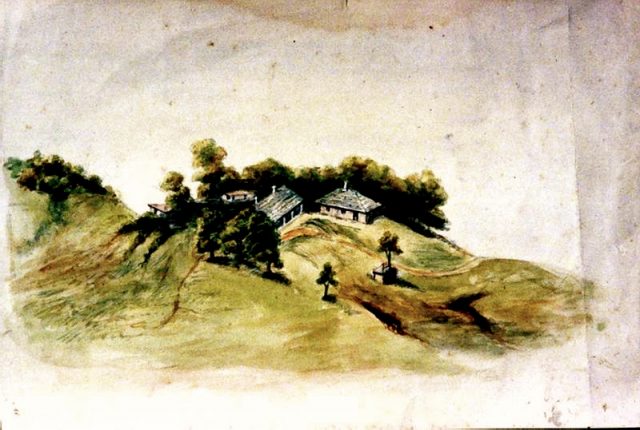 Something’s are not meant to be. And no matter how hard you try, they tend to turn out exactly as they were going to anyway. Or so it was at the turn of the twentieth century, with the arrival of the Accreditation Committee in an old hotel, that threw everything into a tailspin. Almost thirty years ago, I witnessed that ill- fated visit. Seems like they wanted to pick flaws among the freckles. Primed like a homing missile, they headed straight into the dark cavernous kitchen. That’s where they found the old blackboard, untouched by the hand of man for over half a century, with orders dating to the beginning of the Second Great War. If you peered through the film of soot-and- Promote Virtue Three leafed Oxalis grime, you discovered that Room No.5 was still awaiting its Hungarian goulash and in Room No. 16 someone had gone grey while waiting for the ‘just-now-coming’ chicken soup. As luck would have it, on her way through the winding corridors of this historic building, the Chairperson of that august committee, needed to powder her nose. Immediately, she was shown the way, as befitted her status, to Suite No. 8 – the hotel’s finest room. She bounded up the wooden staircase, two at a time, flung her handbag on the sofa, and disappeared into the washroom. On her return she discovered that the bag had gone missing. A monkey did what monkey’s do – played spoilsport with perfect timing – sneaking in through a broken windowpane to pinch the precious bag, oblivious of the guest’s importance. Precariously perched on a ledge, he rifled through it. Please don’t ask me for a listing. Scattering the spoils, in broad daylight, on the landing below, for all and sundry to gawk at. Of course that single act ensured the only stars this hotel was going to see were the ones you saw in the night sky. And it’s the nostalgia dear Reader, that draws me back in time when a retired army schoolmaster, bitten no doubt by the ‘Health is Height’ bug, moved lock-stock-and-barrel from Meerut to the hill station. In 1834, this Scotsman built the Mussoorie Seminary – our first school- in Bansi Estate to the west of Benog. Suddenly, without as much as by-your- leave, he switched careers midstream to turn brewer. But that’s another tale for another day. Under the strict watch of Henry Ramsey, who lived in Wycliffe, the school waddled along up until 1850 when it stuttered and shuttered. Like a knight in shining armour, came the Irish Reverend Maddock, chaplain of Christ Church, and asked his brother Robert North Maddock to take over the institution, albeit in a changed location: a flat atop a hillock behind the Mussoorie Library. This time around, it was no stick-and-paste job. It was a pucca school. The fee was steep. Unfortunately, this too did not work. In 1865, the school was sold to the Church of England, with the backing of Bishop Cotton, the founder of BCS Simla (1859) and St. Paul’s Darjeeling (1864). Thus we had Stoke’s School that thrived for thirty years, from 1869 to 1899 and to it flocked the sons of the officers of the Raj. Famous names? If that’s what you want: there was William Wilcocks who built the first Aswan Dam between 1889- 1902; there was C. M. Gregory, who built the earliest railway bridges and then the boys from the famous Skinner and Corbett families, who made a name for themselves. Consider the fact that by 1867, there were nine hundred or so students, whereas by the turn of the nineteenth century, this number plunged to double digits – just seventy-one pupils. Historians ascribe this steep decline to the fact that the boys finishing from here did not get jobs befitting their education. By 1900, finances spun out of control and the Mussoorie Seminary or Maddock’s School wound up after sixty-six years. While that ill-fated Committee definitely missed out on the iconic shamrock carved along the eaves – that three leafed oxalis symbol of Irish pride and heritage: faith, hope and love, which plays hide-and-seek in the property, is now a heritage hotel. Reminding us, one must continue to twinkle even as you wrinkle.

Garhwal Post has established itself as a credible, balanced and forward looking newspaper in India. Based in Uttarakhand, the daily is read by the aware, socially and culturally responsible, high-income elite of society.
Contact us: info@garhwalpost.in
dating in daytona beach online dating for persons with disabilities fab hookup site