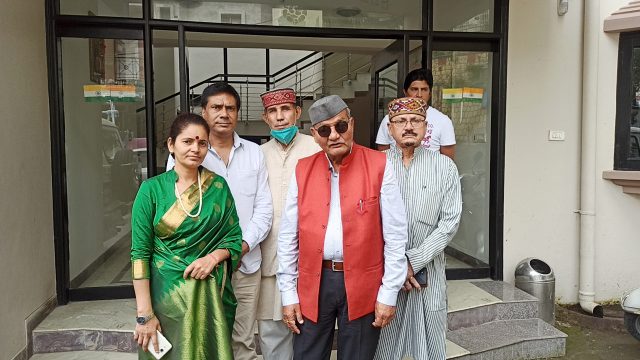 By Sunil Sonker
Mussoorie, 5 Oct: Kashi Singh Airy, the Central President of Uttarakhand Kranti Dal, while addressing a press conference in Mussoorie, today, attacked the Pushkar Singh Dhami government of the state. He said that the central leadership of the BJP has not give a Chief Minister to the state, but an accountant.
Airy said that Chief Minister Pushkar Singh Dhami is continuously misleading the people of the state by making announcement after announcement. The model code of conduct would be implemented from December, so it was not possible to implement the announcements. He said that unemployment and corruption were at a peak in the state, while law and order has completely collapsed. The state government was being able to nothing about it. He said that the Congress and BJP were alternately in power, but both only looted the state. No development had taken place.
He said that Uttarakhand Kranti Dal had continuously demanded a land law in the state, similar to Article 371. It is also wanted a ban on political horse-trading. Neither the central nor the state government was paying attention. He alleged that the state government had sold the state to the liquor, land and mining mafias. It was in debt to the tune of several thousand crore rupees. The government did not even have money to pay salaries to the employees. There was continuous migration from the state, but the government had nothing dealt with it.
Airy claimed that, in 2022, the Uttarakhand Kranti Dal would field its candidates in all the 70 assembly constituencies. He said that the development of the state could only be done by a regional party. The UKD had fought for the creation of Uttarakhand. He expressed confidence that people would extend support to the regional party. He said that the regional party of Delhi was making lavish announcements, here, but nothing would happen. Present on this occasion were Lalit Bisht, Kishan Singh, Kiran Rawat, Jai Prakash Upadhyay, Bahadur Rawat, District President Deepak Rawat, Usha Panwar, Vijay Bodai, Pushkar Singh Gusain, Kamalkant and others.