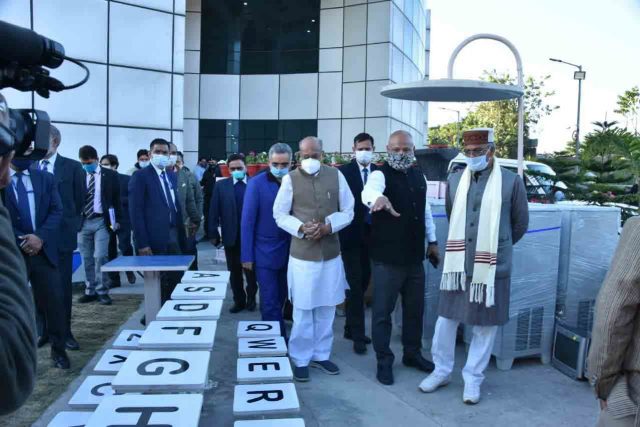 By Our Staff Reporter
Dehradun, 27 Nov: Union Minister of Electronics and Information Technology Ravi Shankar Prasad laid the foundation stone of the Software Technology Parks of India Dehradun Incubation Centre at ITDA here, on Friday, through the virtual medium, along with Chief Minister Trivendra Singh Rawat. On this occasion, Chief Minister Rawat also announced that a roboticd lab would be established soon in Dehradun for which land is also being made available.
Chief Minister Trivendra Singh Rawat and Union Minister of State for Information Technology Sanjay Dhotre also inaugurated an e-waste studio on this occasion.
Union Minister Prasad said that he loved Uttarakhand very much and respected the people. Uttarakhand is the centre of spiritual, cultural and civilisational culture of India. Incubation means creation. The Vedas emerged from Uttarakhand, where the origins of Kedarnath, Badrinath, Ganga and Yamuna are. Now, the new technology is being incubated from the state of Uttarakhand.
He declared that the people of Uttarakhand had an unlimited ability to work and a sense of dedication. Under the leadership of Chief Minister Rawat, the state of Uttarakhand is progressing fast.
The Union Minister instructed the STPI officials to make this incubation centre better and more modern, particularly as there is tremendous potential in the field of startups in Uttarakhand. BPOs had been set up in Dehradun and Haldwani. He said that a new scheme called “Challan” was being run. The objective of this scheme is to develop creativity among the children of small towns.
He said that a robotics centre should be built in Dehradun. It should become an important centre in India. For this, full support would be given to the state government. One brand of Uttarakhand is spirituality and the other should become robotics. Today, 46 hospitals in Uttarakhand had become e-hospitals. Rishikesh AIIMS was doing well. The objective of the PM’sw Digital India is to make the common people stronger through technology. Its people were getting many benefits. The life of the common man could be changed through technology.
In BharatNet Phase 1, 1800 gram panchayats of Uttarakhand had been connected. The State Government would also be fully supported in Phase 2. WiFi facility had been provided to 50 thousand people through 310 Gram Panchayat CSC Centres in Haridwar.
Chief Minister Rawat thanked Union Minister Prasad for laying the foundation stone of the STPI Dehradun Incubation Centre. He also said that electric waste is being used better by the ITDA. Commendable work of converting the electronic waste through team work is being done. The IT Park had done business of Rs 150 crore in 2019-20. This had provided direct employment to over 2500 people.
Chief Minister Shri Trivendra said that the Dehradun incubation centre would be helpful in attracting investment to Uttarakhand and establish it as a major IT/ITES destination. This would also help in providing additional incubation facilities for startups and entrepreneurs and to promote IT software, services exports and entrepreneurship in the state.
Giving information about the e-waste studio, Director of ITDA, Amit Kumar Sinha said that this studio, built with the purpose of generating public awareness on e-waste recycling and disposal, was completely made from recycled e-waste. An internal drone racing track had also been built. As many as 25 computers were prepared by reusing the collected e-waste, which were presented to 10 primary schools in the district.
Present on this occasion were Minister of State for Information Technology Sanjay Dhotre, Mayor Sunil Uniyal Gama, Secretary, Information Technology, RK Sudhanshu, and Director, ITDA, Amit Kumar Sinha, Secretary, Ministry of Electronics & Information Technology, Government of India, Ajay Prakash Sahni and Director General, STPI, Dr Omkar Rai, etc. via virtual medium.