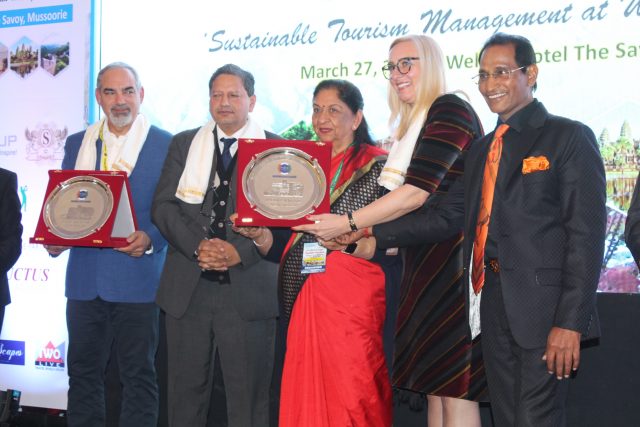 By Sunil Sonker
Mussoorie, 27 Mar: The Tourism Committee of PHD Chamber of Commerce & Industry (PHDCCI) organised the 8th India Heritage Tourism Conclave, here, on the theme ‘An Integrated approach towards Sustainable Tourism’, today. The objective of organising the Conclave was to promote the heritage sites of India to the wide variety of global leisure and excursion travelers. The conclave was jointly inaugurated by Chief Guest Dr Sanjeev Chopra, Director, Lal Bahadur Shastri National Academy of Administration, and other dignitaries.
On the occasion, renowned writer and Padma Bhushan awardee Ruskin Bond, Bill Aitkin, Travel Writer, Dinraj Pratap Singh, Owner of Kasmanda Palace, and Brother Carrol, Brother Superior, St George’s College, were felicitated for the work done by them in their field.
Addressing the gathering, Dr Sanjeev Chopra said that the 8th India Heritage Tourism Conclave organised in Mussoorie was a matter of pride for the town and Uttarakhand. Uttarakhand and Mussoorie occupied important places in tourism. He said that the High Commissioners and Ambassadors of 6 countries participating in the conclave had talked about several important issues related to tourism and had described the heritage tourism of their respective countries. Detailed information was also given about the types of facilities being provided to the tourists so as to facilitate the tourism industry. Dr Chopra added that the training of IAS officers was very important as they contributed significantly to the administrative services of the country. And in such cases, IAS officers should be aware of all the subjects in important areas of tourism as well.
Radha Bhatia, Chairperson, Tourism Committee, PHDCCI, told media persons that the Chamber was taking the legacy forward of hosting its India Heritage Tourism Conclave, which first commenced in 2011. Through this Conclave, PHDCCI aimed to illustrate how World Heritage Sites could be integrated into broader regional and destination-level tourism management processes, creating a strong platform to exchange best practices, discuss challenges and opportunities in the Heritage Tourism sector. The conclave had addressed all aspects of heritage, be it wellness, religion, cuisine, crafts, music and key tourism management issues, such as coordination between heritage management and tourism organisations, extending benefits to local communities, reducing tourism congestion and environmental impacts.
Yogesh Srivastav, Principal Director, PHDCCI, proposed the vote of thanks and said that there was now broad consensus that tourism development should be sustainable. Increasingly, destinations were endorsing and following ‘Responsible Tourism’ as a pathway towards Sustainable Tourism. The Conclave was attended by the officials of the Ministry of Tourism, UNESCO, Indian and Foreign Tour Operators, State & International Tourism Boards, Embassies & High Commissions, Rajan Sehgal and Kishore Kaya, Co-Chairmen – Tourism Committee, and all other relevant stakeholders.

Garhwal Post has established itself as a credible, balanced and forward looking newspaper in India. Based in Uttarakhand, the daily is read by the aware, socially and culturally responsible, high-income elite of society.
Contact us: info@garhwalpost.in
https://garhwalpost.in/trans-single/ flirt with random genuine hookup sites