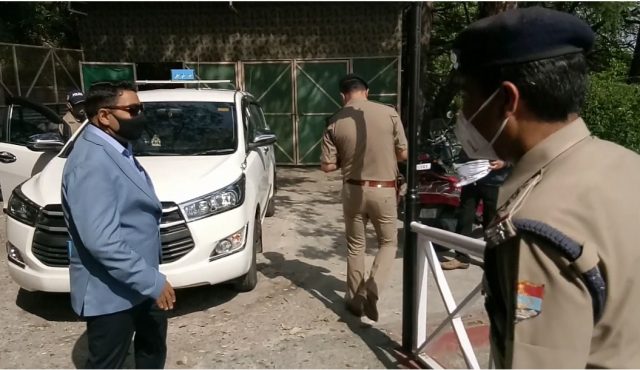 By Our Staff Reporter
Mussoorie, 30 May: Uttarakhand DGP Ashok Kumar reached here on a personal visit today.
In an interaction with reporters, he said that the Uttarakhand police had done an excellent job against the Corona pandemic. The second wave was quite dangerous, having much greater impact than last year. Many people had lost their lives. A time had come when everything was out of control, the number of corona infected patients was increasing daily, and there was a huge shortage of hospitals, oxygen, and ICU beds. The Corona Curfew was strictly implemented by the police to break the chain of infection, which proved successful.
He said that under the ‘Mission Hausla’ of the Police, help is provided to the needy people such as medicines along with ration, etc. While the Police enforced the lockdown, it also provided humanitarian assistance to every person. He appealed to the public not to give up on precautions and to follow the rules issued by the administration and government so that the infection could be completely eradicated from the state.
DGP Ashok Kumar added that it was necessary for people coming from other states to bring a negative RT PCR test report. To enforce this, continuous checking is being done at the Uttarakhand borders. Thousands of people coming without RT PCR tests are being sent back.
In response to a question, he declared that every effort is being made to solve the issue of constables’ pay grade. Chief Minister Tirath Singh Rawat has also assured that the matter would be resolved soon.