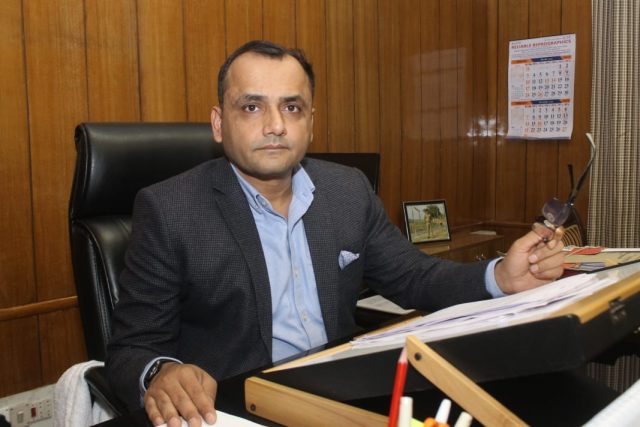 By Arun Pratap Singh
Dehradun, 25 Jan: ADG (Admin) Abhinav Kumar, a 1996 batch IPS officer, has wide ranging experience in policing. Recently promoted to the post of ADG (Administration), his previous assignments include posting as SSP Haridwar, IG Garhwal in Uttarakhand and IG BSF in J&K, besides having served with Government of India at the Centre. He is a regular writer who contributes columns on contemporary topics in leading newspapers in English. He loves to express his opinions freely through his articles. Garhwal Post had a conversation with him on various matters. Some excerpts:

What are the major challenges regarding maintaining law & order in Uttarakhand from the policing perspective?

Though my present assignment does not have a direct relationship with the maintenance of law and order per se, but having held various such assignments in the past, I can say that there are major challenges before the Police regarding maintenance of law and order. One major factor is a large floating population of visitors in Uttarakhand. It is estimated that over 2 crore people visit Uttarakhand, each year, most of them tourists or pilgrims. For a state the size of Uttarakhand, it is a large number and this creates problems of traffic management, crowd management and, of course, crime also. Then there are areas within the state where public expectations are very high on development, etc., and these lead to demonstrations and agitations. It becomes a challenge for the Police to manage the demonstrations and agitations so as to maintain peace and ensure that inconvenience to the public as a result of these agitations is minimised.

Internal security also offers a big challenge for the Uttarakhand Police, as the state houses a large number of institutions and installations of sensitive nature, such as the IMA, various installations of the Armed Forces, many Central Government institutions of sensitive nature, besides educational institutions of prestige such as Doon School or IIT Roorkee which may be likely targets for anti-national forces. In addition, Uttarakhand is highly prone to natural calamities such as earthquakes and landslides, where the Police have a huge responsibility as first respondents. Fortunately, there has been no major earthquake for the past twenty odd years, but there were major calamities such as the 2013 Kedarnath disaster. So, there is constant possibility of natural calamities in the state and we have to be in a state of preparedness to deal with them.

Uttarakhand is a border state which has its borders with China and Nepal. What are the major challenges from the security perspective due to this position?

Of course, we have the ITBP and the Indian Army deployed at the borders, but the local police also have responsibilities for border management as far as the population and crime are concerned. Fortunately, the Indo-Tibetan border is not that heavily populated. But, the Indo-Nepal border on our side right up to Lipulekh is fairly decently populated, with Champawat and border areas of Udham Singh Nagar district quite heavily populated areas. With recent differences with Nepal regarding border areas of Uttarakhand, it is a case of concern for the Uttarakhand Police and we work very closely in coordination with the ITBP and the Indian Army authorities to ensure proper management of our border areas and border population.

Cyber Crime is rising sharply everywhere including in Uttarakhand and is emerging as a major challenge for the Police. How well is the Uttarakhand Police equipped or upgraded to deal with the rising cyber crime in the state?

Well, naturally there is some gap between what the requirements of the Police are and the resources available. No Police Force can claim to possess optimum resources to deal with such challenges. This calls for better utilisation of the available ones. However, if you look at the graph of the Uttarakhand Police, then I must say that we have received good cooperation from the state government as well as the Centre in terms of resources towards our modernisation and improving our infrastructure. Even for training, we have received good cooperation from the Centre and the state. When the state was formed, there was no training centre and we had to depend on training centres in Moradabad and places in other states. It took some years, but now we have training centres in Narendra Nagar and Haridwar. We had no forensic science laboratory in the state and now we have a modern forensic laboratory in Panditwari (Dehradun) and smaller forensic laboratory at the range level and even mobile forensic units in the state. So we are improving. This is an ongoing process.

You were posted with BSF in J&K when Article 370 was abrogated and the state was made a Union Territory! From the perspective of policing, how smooth or problematic was this transition?

From the policing or security perspective, the best yardstick is the level of violence. If you compare the abrogation of Article 370 with the encounter of Burhan Wani in 2016, while there were more than a hundred civilian casualties within two months of his encounter, many of them in police firings, the transition to the new situation as a union territory and abrogation of Article 370 was much smoother. From the BSF perspective, under my tenure not a single BSF personnel was killed and not a single civilian casualty at the hands of the BSF. It was a great personal satisfaction for me that neither did I lose any of my Jawans nor was my force reason for even a single civilian casualty. We stuck to our mandate of maintaining law and order without provocation.

You are a regular writer and have contributed significant articles in leading publications. Now that you have been promoted to a very senior level post with huge responsibilities, will your writing get affected or will you continue to write regularly as before?

One can occupy whatever post or rank, if one has a genuine passion for any creative thing, such as music or writing, one will always find time to do it. Of course, after the promotion, it does take some time to settle down in the new responsibility, but I intend to continue writing and expressing myself as in the past. I have a few ideas in mind about what to write, including the most current topic of farmers’ agitation and how this kind of agitation can affect society.

Since you have reminded me of the farmers’ agitation, tomorrow being the Republic Day, how big a challenge will it be to maintain law and order for the Delhi Police with regards to the proposed tractor rally?

It will be a huge challenge, of course, the sheer number of the farmers and tractors involved in tomorrow’s rally poses a huge challenge, but the Delhi Police is a highly skilled police force and I am hopeful that they will handle it well. Of course, a lot depends on the intentions of those leading the rally tomorrow and if they stick to the plan, and no miscreants and mischievous elements within those agitating do not indulge in any mischief, then it can be managed despite huge challenge. It is a risky thing but I would personally like to appeal to those protesting there that, while it is everyone’s right to protest, it should not be done in a manner that leads to huge inconvenience to the general public or destruction of public or private property.