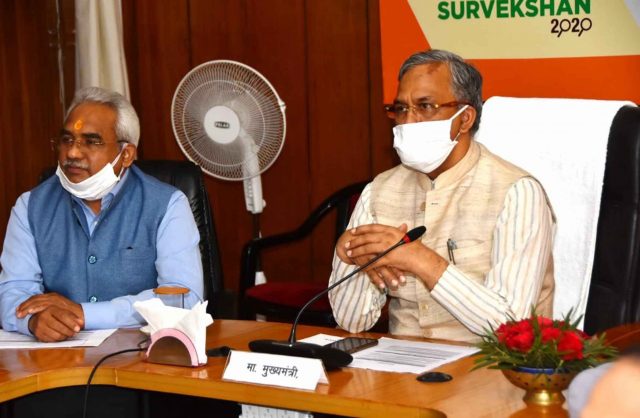 By OUR STAFF REPORTER
DEHRADUN, 20 Aug: Three awards were received at the national level by Uttarakhand under the “Swachh Survekshan -2020”, today. Uttarakhand also secured third place in the category of “Best Performing State” in the category of states with less than 100 urban bodies.
Nagar Panchayat Nandprayag secured the first position nationally in the “Citizen Feedback Category” among bodies with population less than one lakh across the country. Cantonment area Almora placed third in “Citizen Feedback category” and got the third prize for the state.
Chief Minister Trivendra Singh Rawat and Urban Development Minister Madan Kaushik received these awards.
Chief Minister Rawat, while congratulating the urban bodies that received the National Award in the Cleanliness Survey 2020, said that the bodies should work in the future also with the same spirit. There was room for much improvement in the field of sanitation. He said there has been good improvement in the ranking of cities and urban bodies of the state. He emphasised on better performance. Special attention needed to be given to cleanliness to carry forward the Clean India Mission campaign of Prime Minister Narendra Modi. With the help of cleanliness, many diseases could also be prevented.
Urban Development Minister Madan Kaushik said that, under the leadership of Chief Minister Trivendra Singh Rawat, the State Government was working very seriously for improvement of the urban areas. The state had continuously worked to empower the municipal bodies and to develop new sources of income. The urban bodies had been asked to work on keeping cleanliness a top priority.
Hardeep Singh Puri, Union Minister, Housing and Urban Affairs (Independent Charge), announced the “Cleanliness Survey – 2020” results and distributed the “Clean Survey – 2021” Awards over the virtual platform. In this year-long nationwide process, 4242 towns and 62 cantonment boards across the country participated.