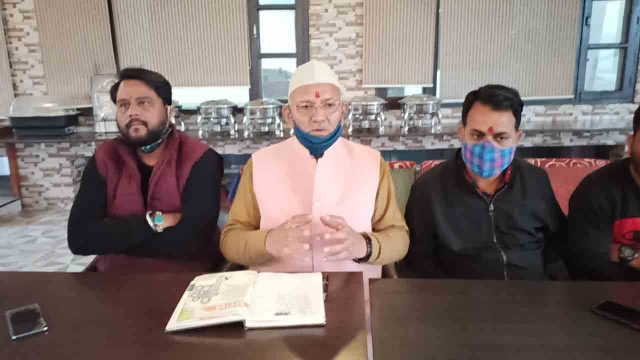 By Our Staff Reporter
Mussoorie, 16 Nov: Uttarakhand Congress State Vice President Jot Singh Bisht raised many questions about Chief Minister Trivendra Singh Rawat and Uttar Pradesh Chief Minister Yogi Adityanath at a press conference hled, here, today. He said that the matter of assets distribution between Uttar Pradesh and Uttarakhand had been pending for a long time. It was a suitable opportunity as the BJP had a majority government in Uttarakhand and Uttar Pradesh and also at the Centre. The long pending issue of assets distribution could be resolved with ease.
He also alleged that the BJP governments of Uttarakhand and Uttar Pradesh had not done anything in the name of development, only the work of misleading the people was being done.
Jot Singh Bisht questioned the visit of Chief Minister Yogi Adityanath and Chief Minister Trivendra Singh Rawat to Kedarnath. The Meteorological Department had earlier predicted that snowfall and rains could occur in the high altitude areas on 16 and 17 November. The arrangements had been exposed in Kedarnath and both the chief ministers were trapped in Kedarnath after heavy snowfall. They didn’t have the courage to return on foot. Former Chief Minister Harish Rawat, who is around 75 years old, went with Rahul Gandhi for the Kedarnath Yatra on foot. The state government had talked big about the arrangements for devotees during the Char Dham Yatra, but this year the first snowfall had exposed all the claims.
Jot Singh Bisht said that, on Uttarakhand Formation Day, Chief Minister Rawat announced a Rs 25,000 crores for plan for the development of Gairsain in the next 10 years. This, despite the state already being under a debt burden of Rs 50,000 crores, so where would the money come from? He said that in 4 years, the Trivendra Government had done nothing for the development of the state. He had spoken about zero tolerance on corruption, but had, himself, been embroiled in corruption. He expressed confidence that the people of Uttarakhand would teach lesson to the BJP in the 2022 election.
Also present at the press conference were Mussoorie Congress President Gaurav Aggarwal and Aminder Bisht.