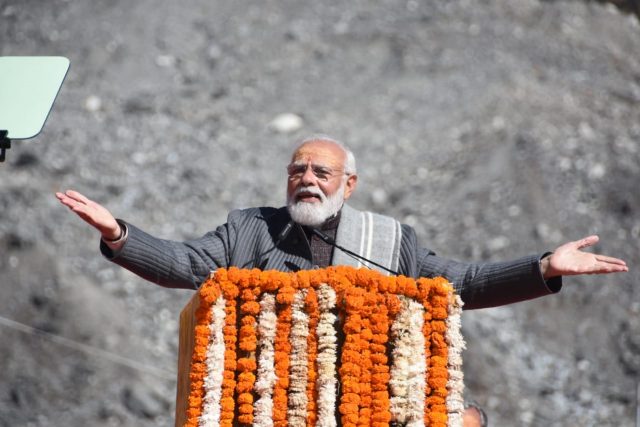 By Arun Pratap Singh
Dehradun/ Kedarnath, 5 Nov: Prime Minister Narendra Modi today offered prayers at the Kedarnath shrine and inaugurated the rebuilt Samadhi of Adi Shankaracharya at Kedarnath. He also unveiled a 12 feet high statue of Adi Shankaracharya on this occasion and addressed the gathering there. Although his speech mainly focussed on Adi Shankaracharya’s achievements and spiritual issues, he still made some political statements. Modi also declared that the next decade would one of fast development for Uttarakhand, which would reduce migration from the hills. He also praised the hard work being done by Chief Minister Pushkar Singh Dhami and appreciated Uttarakhand’s achievement regarding hundred percent vaccination of the eligible population with one dose of Covid vaccines.

During his stay at Kedarnath, Prime Minister Modi also inaugurated and laid foundation stones for projects worth Rs 400 crores. The unveiling of the statue of Adi Shankaracharya and inauguration of his renovated Samadhi were the major highlights of the inaugurated projects. 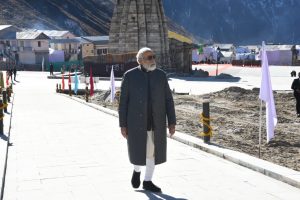 The Prime Minister said that he had full faith that, after the disaster of 2013, Kedarnath Dham would stand again with full pride and glory, though many people had their doubts. He described the reconstruction of Kedarnath as ‘God’s grace’ and thanked everyone who contributed to it. He praised the CM and the officials as well as the labour force that was engaged in the reconstruction of Kedarnath despite adverse weather conditions and said he was aware how challenging the task was given the weather conditions there. He also reminded the gathering that, while reviewing the progress of Kedarnath reconstruction, he had paid virtual visits several times to Kedarnath through a drone! He also dwelt on his special relationship with Kedarnath and said he had been fortunate to have spent some time here and to interact with sages who lived here in the past. He recalled that he had an old relationship with Garudchatti. He always felt blessed to be in Kedarnath and, this time, he was particularly fortunate to be here on the occasion of Govardhan Puja day.

Modi asserted that rapid development work is being done in Kedarnath. Reminding that he was the Chief Minister of Gujarat during the 2013 disaster, he pointed out that he had visited the disaster hit Kedarnath and seen the disaster personally. The dream he had of rebuilding Kedarnath was being fulfilled now. As a combination of modernity with the eternal on this primitive land, these works of development were the result of the natural grace of Bhagwan Shankar. He praised Chief Minister Pushkar Singh Dhami for speeding up reconstruction works. He also thanked the Rawals, priests of the temple and all those who took responsibility for these construction works for their hard work. In particular, he thanked the workers involved in the reconstruction work and acknowledged that it was very difficult to do construction work here amidst snowfall and bitter cold. 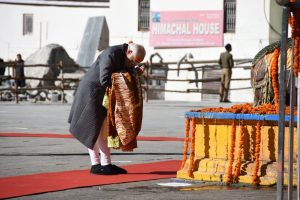 In the context of Uttarakhand, the Prime Minister said that the work on the Char Dham road project was in full swing. All the four Dhams were being connected by safe highways. In future, the devotees would be able to come to Kedarnath via cable car. He added that a project to construct a ropeway for Hemkund Sahib was also under preparation. PM Modi expressed satisfaction that development work was being done in Uttarakhand. As a result of this, the number of devotees coming to Char Dham Yatra was increasing continuously. In the coming 10 years, more devotees would reach here for the Yatra as had in the last 100 years. He said that the people of Uttarakhand showed courage during the corona pandemic. Regarding the first dose of corona vaccination, 100 percent of the target had been achieved, though it was a challenging task for the state due to its difficult topography. He said that Uttarakhand would develop even more rapidly over the next decade and, then, the water and the youth of the mountains would be more useful to the state, as migration would be arrested.
Modi spoke at length about Adi Guru Shankaracharya, who established monasteries and worked on the renaissance of the twelve Jyotirlingas. In his childhood, he sacrificed everything and created a strong tradition for those who live for the country, society and humanity. What he achieved in a small period of time was truly unprecedented and could be achieved only because he was blessed with Shiva’s powers. Modi also recited several Sanskrit Shlokas to highlight his points. Modi said that Adi Shankaracharya played a crucial role in the revival of spirituality and Dharma at a time when ritualism had taken strong roots and was distorting Dharma. Spirituality and religion had become very ritualistic in those days and he restored the true glory of the faith and cultural heritage. Modi added that he felt blessed to have spent some time at the renovated Samadhi of Adi Shankaracharya.
The Prime Minister added that the importance of the Chardham Yatra had existed for centuries. Pilgrimage is considered a crucial part of everyone’s life. India’s cultural heritage and centres of faith were now being looked upon with the same pride that they actually deserved. He called upon the people to visit pilgrimage and religious places.
The Prime Minister also spoke about the under construction Ram Temple project in Ayodhya. He emphasised that it was after several centuries that the glory of Ayodhya, the birth place of Ram, was again being restored. Just two days ago, the whole world saw the grand celebration of Deepotsav in Ayodhya. It was now easy to imagine how the ancient cultural form of India must have been. Similarly, Kashi was also being rejuvenated in Uttar Pradesh. The work on Vishwanath Dham was progressing towards completion at a very fast pace. In his address, the Prime Minister also mentioned Ayodhya, Kashi and Mathura, making it clear how important these issues were for him and his Government.
The Prime Minister said that the country is now setting big goals for itself with pride. It is setting hard deadlines, though many people remained sceptical. However, being intimidated by the limits of time was no longer acceptable to India.
At Kedarnath, apart from the unveiling of the new statue, inauguration of the residences of the Teerth Purohits, the construction of flood protection retaining walls and the ghats on the banks of the Saraswati River, the load bearing wall for flood protection on the banks of River Mandakini were some of the projects that were inaugurated today. In addition, foundation stone was laid for several other projects that included redevelopment of Sangam Ghat and Rain Shelter Shed in Kedarnath Dham, First Aid and Tourist Facilitation Centre, Mandakini Aastha Path Line Management, Mandakini Water ATM and Mandakini Plaza, Administrative Office and Hospital Building, construction of the Museum Complex, and Saraswati Civic Amenity Building.
On this occasion, Governor Lt Gen Gurmit Singh (Retd), Chief Minister Pushkar Singh Dhami, Cabinet Minister Dr Harak Singh Rawat, MP and former Chief Minister Tirath Singh Rawat, MLA and BJP State President Madan Kaushik, and Chief Secretary SS Sandhu were among those present.