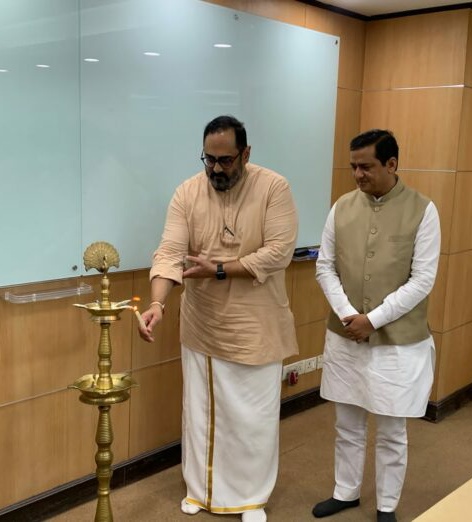 By Our Staff Reporter
Dehradun, 1 Nov: Union Minister of State for Electronics and Information Technology Rajiv Chandrashekhar and Rajya Sabha MP and BJP’s National Media Head Anil Baluni inaugurated the state’s first Internet Exchange set up at IT Park, here, today. According to Baluni, one internet exchange will be established in every district of the state soon.
On this occasion, Union Minister Chandrashekhar said that the Centre is committed to the development of Uttarakhand. The establishment of this internet exchange in Uttarakhand would benefit the youth working in many sectors. Along with this, children studying online would also get the facility of high speed internet. He added that the Internet Exchange would raise the potential for more BPO companies setting up their offices in Uttarakhand. Chandrashekhar also announced that, very soon, another internet exchange would be set up in Nainital.
Baluni said it would be his endeavour to establish such efficient internet exchanges in every district of the state. With this, stable internet facility would be available in hill and remote villages, also. The internet exchange would provide many benefits. Internet facility would now be available even in the inaccessible areas. Students studying online, youth associated with work from home and government departments, non-government institutions would benefit greatly from the Internet Exchange. He also said that more Call Centres and BPO companies would comed to the state as a result of the Internet Exchange being set up here. This would open more avenues of employment for the youth of the state.
It may be recalled that on 4 October, Anil Baluni had raised the issue of internet speed in the state with the Union Minister of State for Electronics and Information Technology, Rajiv Chandrashekhar. He had urged that internet exchanges be set up for high speed internet services in the state. The Union Minister had given his consent to this.
Minister Ganesh Joshi, Raipur MLA Umesh Sharma ‘Kau’, Rajpur MLA Khajandas, Ramnagar MLA Diwan Bisht, BJP State Vice President Dr Devendra Bhasin, BJP State Spokesperson Bipin Kainthola, Nixie CEO Anil Jain, GM Nixie Shantanu, and several other public representatives and officials of the Internet Exchange were present on the occasion.