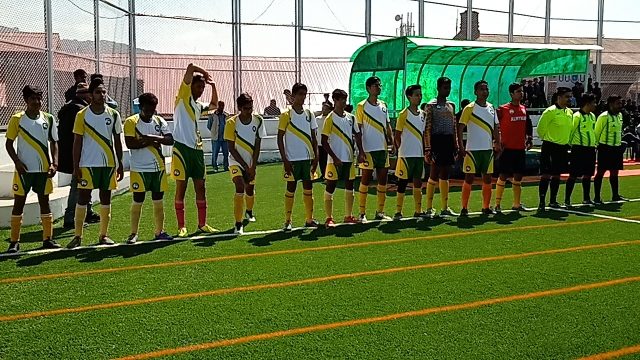 By Sunil Sonker
Mussoorie, 29 Mar: The first Astro Turf football field in Uttarakhand has been developed at St George’s College, here, which is very special in itself; football players playing in field will not suffer injuries. Even during the rain, water will not collect in the field. The first Astro Turf football ground was inaugurated by Principal Bro Tommy Varghese. Football matches were also organised on this occasion.
Principal Varghese said that it was the first Astro Turf football field in Uttarakhand, on which state and national level football matches will be held in the future. He recalled that due to pebbles on the ground, players had to face lots of problems while playing and they even got hurt. The prestigious Jackie Football competition is organised every year at St George’s College in which many football players of the country participate and the gravel caused problems. Seeing this, the college administration decided to lay the Astro Turf on the ground. Varghese said the college administration was continuously working to provide better education and sports facilities to the students.
Football coach Anand Thapa said there was a rubber layer beneath the astro-turf, which would protect anyone who fell. The water would not accumulate on the ground as it would be absorbed. Students also expressed pleasure at the development.