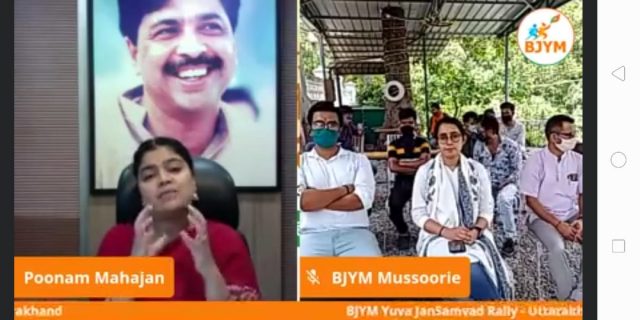 DEHRADUN, 30 Jun: Bharatiya Janata Yuva Morcha (BJYM) National President and MP from Mumbai North-Central, Poonam Mahajan addressed a Mega Virtual Rally for Uttarakhand State BJYM volunteers yesterday.
BJP and its youth wing BJYM have been actively connecting and engaging with their volunteers via virtual medium all through this lockdown. In fact, BJYM was the first political organisation to hold its National Executive meeting via video conferencing on 3 June.
Addressing the ‘Yuva Samvad Rally’, Poonam Mahajan praised the relief work done by the Morcha activists in Uttarakhand during the lockdown period. She said that Uttarakhand is a perfect example of a state where the government and socio-political organisations worked in tandem to ensure service to the most vulnerable.
Through her address, Mahajan reminded the youth of Uttarakhand of the natural and spiritual wealth that this young state is blessed with and the duty of the youth to conserve this. She said that people in other states came to Uttarakhand for spiritual awakening and, today, when Maharshtra has a dysfunctional government leading to complete breakdown of the system, the only guiding light was the venerable Governor, Bhagat Singh Koshyari, who is Uttarakhand’s gift to the people of Maharashtra. 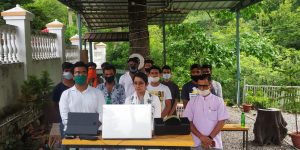 She mentioned the All-Weather Road, Rishikesh-Karanprayag railway line projects of the Central government and the Prasad Yojana, the decision to set up a ‘youth commission’ by the Trivendra Singh Rawat Government as steps that were going to redefine the future of Uttarakhand.
Chief Guest Dr Dhan Singh Rawat, Minister of State, Uttarakhand, lauded the pioneering role of the Yuva Morcha in taking Centre and State governments’ public welfare schemes to the youth of the state.
Kundan Latwal, State President, said that every worker of BJYM is engaged in public service with all his/her might and has vowed to not back down till the epidemic stops.
National co-media in-charge, Yuva Morcha, Neha Joshi said that 12.37 lakh youths from across the state participated in this huge virtual rally from various places via Facebook, Twitter and Instagram. In her address, she thanked Poonam Mahajan for motivating the youth of Uttarakhand and invited her to visit the Char Dham soon.
BJP’s State Vice President Kailash Sharma, State General Secretary and Yuva Morcha in-charge Kuldeep Kumar, State BJP Bharatiya Janata Yuva Morcha General Secretary Gunjan Sukhija also addressed the virtual rally.
Thousands of activists of the state participated in the rally including Spokesperson Naveen Thakur, BJYM Vice President Sachin Gupta, Kishore Bhatt, Anshul Chawla, Ashish Rawat, Ajay Rana, Neha Sharma, Amit Narang, Ravi Pal, Tarun Dutta & Media Incharge Ashutosh Mamgain, as well as Manoj Patwal.