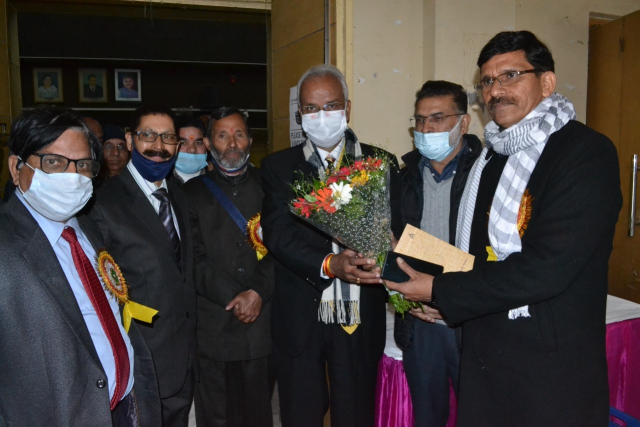 By Our Staff Reporter
Dehradun, 6 Jan: The biennial convention of the Journalists’ Union of Uttarakhand was organised in the Nagar Nigam Auditorium, here, on Wednesday. The new state executive of the union was elected in the pre-lunch session. Umashankar Praveen Mehta as State President and Girish Pant as General Secretary were unanimously elected by those present. The newly elected President and General Secretary were authorised to appoint the other office bearers and the members of the executive committee. The elections were conducted by the Union’s Election Officer, Sanjeev Sharma, and Assistant Returning Officer Shiveshwar Pandey, in the presence of former National President of Indian Journalists’ Union SN Sinha and National General Secretary Balwinder Singh Jammu. Outgoing President of the union, Arun Pratap Singh congratulated the newly elected President and General Secretary and wished them a fruitful term.
Chief Minister Pushkar Singh Dhami was the Chief Guest at the second session of the state level convention.
President Umashankar Praveen Mehta’s name was proposed by Girish Pant and supported by Chaitram Bhatt, Satish Kumar and Dwijendra Bahuguna. The name of Girish Pant for the post of State General Secretary was proposed by Moolchand Shirshwal and Pradeep Rohilla and supported by Vijay Sharma and other members. The remaining office bearers and members of the executive committee will be announced later by the President and the General Secretary.
On this occasion, all the members of the State Executive and the Dehradun District President Chetan Khadka and other members of the district executive including the members from different districts of the Union were present.